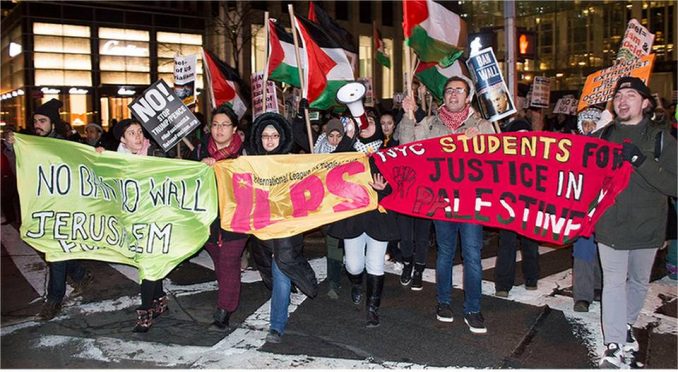 Hundreds of Palestinians and their supporters across the U.S. demonstrated on Feb. 15 to protest a meeting and press conference between U.S. President Donald Trump and Israeli Prime Minister Benjamin Netanyahu in Washington, D.C. It was the first such meeting since Trump’s election.

In New York, dozens gathered for a rally organized by the NY4Palestine coalition outside Trump Tower on Fifth Avenue before merging with a march from Grand Central Terminal and proceeding, several hundred strong, to Trump International Hotel and Tower on Central Park West.

New York City Students for Justice in Palestine Co-chair Nerdeen Kiswani and activist Mohammed Abdel with American Muslims for Palestine, New Jersey led chants of “It is right to rebel! Netanyahu, go to hell!” and “There is only one solution: Intifada, revolution!”

“We’re here alongside our Palestinian brothers and sisters, and all oppressed nationalities of the world, to demand sovereignty and self-determination,” Nina Macapinlac, BAYAN USA northeast regional coordinator, told the crowd. (fightbacknews.org, Feb. 18)

Outside the White House, 200 people chanted “Bibi, go home!” and dozens more rallied at Boston’s Government Center before marching to the offices of the Israeli Consulate General. (middle­easteye.net, Feb. 16)

“Simply because of my religion, I am denied entry to the city where I grew up for the first 13 years of my life,” Yamila Shannan, a Palestinian native of Jerusalem now living in Dorchester, told protesters in Boston. (bostonglobe.com, Feb. 16)

In Chicago, 300 protesters marched on that city’s Trump International Hotel and Tower. “To be committed to social justice means to consistently stand up for those values,” said Eli Massey, a member of Jewish Voice for Peace, Chicago. “One cannot attend a protest against Trump’s Muslim ban on Monday and be conspicuously absent from the Palestine protest on Tuesday and claim to be an agent for social change.” (chicagomonitor.com, Feb. 16)

At least 16 demonstrations were held throughout the country to protest the meeting. Many targeted common elements of the two leaders’ policies, particularly their support for torture of “enemy” prisoners, the use of walls to restrict movement and bans on the entry of citizens from a number of predominantly Muslim countries.

Israel’s Magal Security Systems, which helped build the occupying state’s walls around the Gaza Strip and through the West Bank, is even angling for new business as Trump moves to expand existing barriers along the border with Mexico. “We have the right product and we have the experience in Israel that helps in showcasing our product,” said company CEO Saar Koursh on Jan. 26. (bloomberg.com, Jan. 29)

Trump used his own notorious account on that social media platform to cite Israeli policies — and Democratic politicians’ hypocritical support for them — in defense of earlier proposals. “Hillary Clinton said that it is O.K. to ban Muslims from Israel by building a WALL, but not O.K. to do so in the U.S.,” the then-presidential candidate tweeted on Jan. 2, 2016.

Catron is a member of Al-Awda New York: The Palestine Right to Return Coalition and an organizer with ­Samidoun: Palestinian Prisoner Solidarity Network.