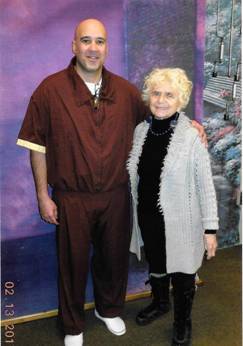 Frackville, Pa. – Joe Piette of the International Action Center in Philadelphia and I, of the International Concerned Family and Friends of Mumia Abu-Jamal in New York City, headed from our respective cities on Feb. 13 to meet in Frackville Prison to visit the environmental activist prisoner Bryant Arroyo. (Frackville, Pa., is just a few miles away from Mahanoy Prison, where Mumia Abu-Jamal is housed).

Joe arrived a little before I did.  By the time I got there, he had already been told he was not on the approved visitors’ list, that there was no record of his scheduled visit, and that he could not visit Bryant.  We asked the guards to check the list again, which they claimed to do, but they refused to show Joe any of the documentation they were supposedly reviewing.

Two hours later, they allowed me in. They claimed the delay of my visit was due to Bryant not being in his cell.  Bryant told me that he had never left his cell and had told the guard that he was remaining there, even cancelling his law library visit, just to be sure not to miss us.  Not a very auspicious beginning — and one highly suggestive of targeted hassling of particular visitors.

Both Joe and I wrote letters to the superintendent of Frackville about the disturbing behavior of the prison authorities in dealing with our visit.  Bryant has filed a grievance on the disruption of his visitors’ ability to see him and of his ability to receive them.  This morning I received an apology from the prison superintendent for the delays.

When I finally got to see Bryant, I was struck by how calm he was since I had showed up without Joe and arrived so many hours after we had said we would be there.   Life in prison inures people to arbitrary delays, postponements and cancellations for many reasons out of the prisoners’ control.  They often don’t even get explanations later.  People “adjust.”

I had spoken to Bryant many times on the telephone, and we had corresponded some as well, but this was the first time I met him. I was struck by his polite, informal and very respectful manner.  Now in his mid-forties, he has been in prison for 23 years.  He has fought to establish his innocence throughout these many years.  It now looks as though his legal filing for wrongful conviction will finally be heard in court within the next year or two.  He is very encouraged by that and hardly refers to the outrageous length of time this struggle has taken.

Bryant grew up in Lancaster, Pa., in a Puerto Rican family that owned different small businesses over the years.  He was a 10th grade high school dropout when he became a father, but he earned a GED diploma.  He later studied computers, drafting and, more recently, “the science of law.”

Bryant had been sentenced to life in prison without parole — a sentence that is being challenged across the U.S. as unconstitutional. Because of the upcoming likelihood of court action, I am respecting Bryant’s request not to discuss the details of his case, which are, nonetheless, available on the internet.

Bryant says he has managed to keep his focus through more than two decades in prison for a crime he vehemently denies he committed by his determination to prove his innocence and get out of prison.  After his release, he would continue the work he began while incarcerated, but on a larger level.  He proudly states that he has never taken any psychotropic medicine, and has never spoken with a psychologist or psychiatrist.  (He noted humorously [that he meant] anyone other than me, a practicing clinical psychologist.)  He says philosophically or due to his faith that he turned the nightmare that was forced on him into a blessing.

I contacted Bryant when we learned several months back, through Mumia, that the water at Mahanoy was dark and smelly, and that this situation was affecting other Pennsylvania prisons, too, including Frackville.  Bryant has filed several grievances about the water at Frackville, but there has been no improvement in the water quality.

As Bryant sees it, the water problem in Pennsylvania prisons is not unique to the prisons, but is a community problem.  It is, however, almost always a problem at the prison.  It is very noticeable when the water is brown or black, but even when it looks clear, it foams in a way that suggests an impurity, and it often smells of sulfur.  There is something wrong with it chemically.

The brothers at the prison constantly go to the infirmary for intestinal problems and frequently visit the bathrooms, especially if they drink a pint or so of water in a single series of gulps.  At Frackville, clean bottled water can only be purchased in the visiting room, not in the commissary.  The guards’ dining room has bottled water available all the time.  The prisoners have no option but to drink the polluted water that makes them sick.

Bryant has written to both the Department of Environmental Protection and the Environmental Protection Agency, but he doesn’t believe their reports are truthful.  First, the monitors who come to the prison do not test the water on the block but rather test somewhat cleaner water.  Second, one government branch often covers up for another.  Didn’t we see that in Flint, Mich.?

Schuylkill, the county in which Frackville is situated, has been called a cancer hotbed because it is so polluted and the cancer rate is so high. Bryant says the government has both the funds and the resources to clean this up.

Bryant had brought a legal suit against a corporation that was going to build a coal-processing plant next to SCI Mahanoy, where he was then housed. He won the legal battle!  The plant was not built.  When Mumia met Bryant after his own release from death row in 2011, he was obviously impressed.  (See Mumia’s column, “What’s a ‘jailhouse environmentalist’”? )

We will surely be hearing more from Bryant Arroyo as he has become a passionate and very skillful fighter for justice, one who challenges the authorities whenever they violate the rights of prisoners.  He is determined to make people aware of these human rights violations.

The writer is a member of International Concerned Family and Friends of Mumia Abu-Jamal.