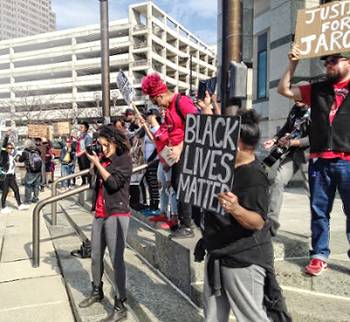 A demonstration was held in Columbus, Ohio, on Feb. 18 to demand answers from the Columbus Police Department about the death of Jaron Thomas, a 36-year-old Black man, the previous month. The event began with a musical performance by three young girls commemorating the Black lives lost in recent years to police violence.

Friends, family and outraged members of the community then marched from Battelle Riverfront Park to the steps of the Columbus Police Department. The building itself, which is typically open 24 hours a day, was inexplicably closed and its doors locked at 2 p.m. — coinciding with the start time of the demonstration. Friends and family, including Thomas’ children, recounted memories and demanded answers for what happened on that night that led to his death.

Thomas called 911 for help on Jan. 14 while suffering from a mental health episode. He had been instructed by mental health professionals to do so whenever he felt such an episode coming on, and he had done so several times in the past without incident.

On the night of Jan. 14, no mental health experts or medical personnel were dispatched to Thomas’ residence. This time, twelve CPD officers were sent. What happened next is unclear, but Thomas suffered multiple serious injuries and brain damage that put him into a coma. On Jan. 23, the 36-year-old father of three died in the hospital.

While the police and city government in Columbus have remained silent, the people of Columbus showed up to the Feb. 18 demonstration to speak out and demand accountability. Signs proclaiming “Black Lives Matter” and “What Happened to Jaron?” were carried, while slogans and chants for justice were shouted through the streets. The makeup of the demonstration was predominantly young and racially diverse. Activists from multiple organizations, including Workers World Party, were in attendance.