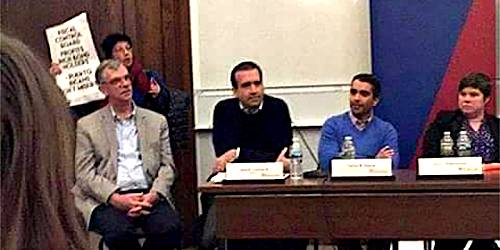 The Fiscal Control Board of Puerto Rico learned a valuable lesson in Philadelphia at a forum organized by the University of Pennsylvania School of Law on Feb. 16.

The lesson is that the saying, “There is no place in the world where there is not a Boricua,” is absolutely true.

Most importantly the fiscal oversight board, which is imposing onerous austerity measures on Puerto Rico, learned there is no place where there is not a Boricua fighting for the islands’ self-determination and independence.

Berta Joubert-Ceci, managing editor of Mundo Obrero/Workers World, learned of the forum with two-hours’ notice. Nonetheless, she became the sole but bold voice at the forum against the vicious austerity measures that are destroying Puerto Rico.

Joubert-Ceci tried to organize others to go with her, but due to the short notice, she went by herself, with placards in hand.

At the forum she let the conservative, reactionary forces know what is really going on in Puerto Rico. She took the floor armed with the placards that stated the board’s role was solely to benefit rich bondholders and bring more misery to the Puerto Rican people.

She told the board, the students and others in attendance, “What this board has said are half-truths that hide what is really going on in Puerto Rico. Puerto Rico is a colony, and we do not have any sovereignty. The U.S. does what it wants with us, and this fiscal board is the tool to bring misery to the people.”

She spoke truth to power for seven minutes and stayed for another hour, commenting loudly about some of the board members’ statements. As she exited the meeting, standing behind them, she shouted to the board, “Why don’t you go and tell these lies in the PR community? You are cowards, that’s why!”

A picture taken by an anonymous person who posted it on Facebook — which has gone viral on Boricuas’ social media — shows Joubert-Ceci exiting the meeting with board members obviously upset about her truth telling. It has sent a clear, bold message to Washington: Puerto Ricans will fight back at every level until their island nation is free.