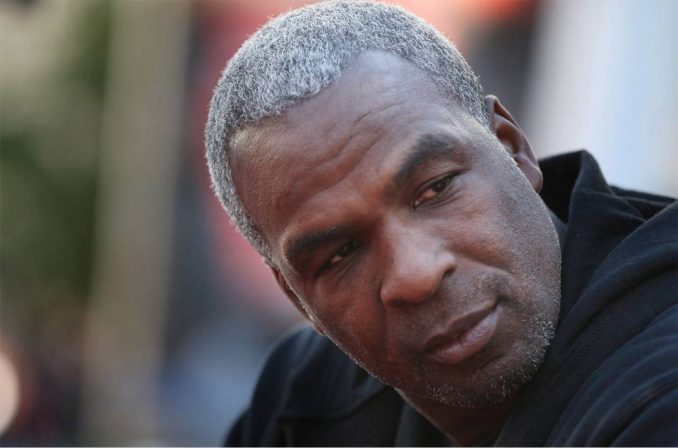 Oakley, an African American and a very popular Knicks player from 1988 until 1998, was dragged out of the arena by at least half a dozen majority white MSG security guards and New York City police officers during a nationally televised game. He was arrested and charged with criminal trespassing and three misdemeanor counts of assault for “hitting” security guards. None of the security guards or police were charged with assaulting Oakley, although the head of MSG security was subsequently fired.

The Knicks’ white owner, James Dolan, had given orders to the security guards to remove Oakley from the Garden. Oakley had been a longtime critic of how Dolan was running the team, which has had a losing record for several years.

Once the assault of Oakley went viral on social media, many Knicks fans came to his defense. They expressed their anger by responding to the popular Twitter hashtag #FreeOakley. Other National Basketball Association players, like LeBron James and Dwyane Wade, expressed support for him. Even at a New York Rangers hockey game held at MSG, predominantly white fans were heard chanting, “Free Charles Oakley!”

On Feb. 10, Dolan attacked Oakley on ESPN radio, implying that he was an “alcoholic” with “anger issues” who “needs help.” Dolan then declared that Oakley would be banned indefinitely from attending any Garden activities. Dolan arranged a photo-op by sitting next to two former Knicks players, Larry Johnson and Latrell Sprewell, who are Black, at a Feb. 12 game.

When NBA Commissioner Adam Silver set up a face-to-face meeting between himself, Oakley and Dolan, with Michael Jordan on speakerphone, Dolan, under mass pressure, was forced to apologize to Oakley and rescind the ban on him. Oakley, dissatisfied with the meeting, told the media that nothing less than a public apology is acceptable.

Oakley stated in The Undefeated, an online sports magazine that takes up social issues, “I wouldn’t be respecting what my grandmother and grandfather put their lives on the line for when they was growing up. They were getting beat up, never having a right to speak up. We didn’t have a voice back in the old days. Did we have a voice back in the ’50s and ’60s?

“Man, all this stuff happenin’ around the country with police and the black community the last couple of years. They say things have changed. They haven’t changed. Only the stoplight change — green, yellow, red.” (Feb. 17)

Etan Thomas, Oakley’s former teammate and now a media civil rights activist, put Oakley’s treatment within the context of the Black Lives Matter struggle. “From the ‘replayed reel of Eric Garner being surrounded by police and choked to death, Thabo Sefolosha’s leg being broken by NYPD, tennis star James Blake being tackled to the ground by NYPD and countless other cases, there was a disturbing racial component seeing security and police surrounding Oakley in the Garden, dragging him out of view and tackling him to the ground,’ Thomas said.” (The Undefeated, Feb. 17)

Dolan has been compared to the former owner of the Los Angeles Clippers, Donald Sterling, who was forced out as owner after making racist remarks against NBA Hall of Famer Magic Johnson and the Clippers Black fan base in 2014.

Draymond Green, an African-American forward with the Golden State Warriors, compared Oakley’s relationship with the Knicks as a player then and now in his Feb. 16 “Dray Day” podcast on Uninterrupted. Green said: “You doing it for me, it’s all good. You doing it against me … you speaking out against my organization, it’s not good anymore? That’s a slave mentality. A slavemaster mentality. That’s ridiculous. It was all fine and dandy when he was laying people out, taking fines and all this stuff for your organization. But now all of a sudden when he says something that he feels, it’s a problem.” Oakley agreed with Green’s statement.

Green stated that a “slavemaster mentality” can generally apply to any relationship between a player and an owner, especially when race is at its core. In the case of the NBA, at the end of the 2015-2016 season African Americans comprised 74.3 percent of players and only 30 percent of coaches. Out of 30 NBA teams, Michael Jordan was the only African-American owner.

The slavery comparison is so appropriate when it comes to the NBA. The only difference is that the players are highly paid workers. They are superexploited commodities that can be bought and sold. The players can never have the same power as the owners, but they can control some of their destiny. They can secure the proceeds from some of their stolen labor through contract agreements and free agency with collective bargaining.

An NBA team is like any other market in terms of how much teams are worth, especially if they have an expensive home base. For instance, the New York Knicks and Los Angeles Lakers rank number one and two as the most-valued NBA teams, at $3.3 billion and $3 billion respectively, mainly because of their wealthier fan base and exorbitant ticket prices.

According to Forbes, “The league’s 30 teams generated $5.9 billion in revenue last season, up 13 percent from the 2016 valuations and another record high for the league.” (Feb. 15) Much of this revenue is rooted in a $24 billion media deal to broadcast games on the ESPN and TNT media networks over many years.

When these players make millions for raking in so much profit for the billionaire bosses, they can come under scrutiny if they speak out forcefully or take action — and especially when racist oppression is the main issue. The fact that Green, who grew up poor in Saginaw, Mich., dared to say that white owners have the propensity for a slavemaster’s mentality, which the brutality against Oakley exposed, struck a powerful chord that cannot be denied.