In the aftermath of the eight years of Barack Obama’s paralysis-inducing deception, along with the rapidly unfolding Donald Trump juggernaut, progressive forces would do well to pursue needed ideological clarity and reinforcement by visiting or revisiting three historic anti-imperialist tomes, as well as embracing a newly minted fourth one by Workers World managing editor John Catalinotto: “Turn the Guns Around: Mutinies, Soldier Revolts, and Revolution.”

Each foundational work readily contributes to staunch anti-imperialist grounding. Ample digestion of all four provides activists with heavily forged political armor, necessary to ward off deliberately spread demoralization, confusion and red-baiting attacks by the warmongers and profit grabbers, aka, the military-industrial-technological complex. That also includes those who quickly imbibe the “Make [U.S.] America great again” Kool-Aid.

“Turn the Guns Around” (2017) focuses primarily on four historic periods in the 19th and 20th centuries, with major emphasis on the war in Vietnam, instigated  by the United States. Anti-colonial movements shook Asia, Africa and Latin America. The war in Vietnam took center stage by the mid-1960s. And the draft was fast becoming a vehicle for resistance, inside and outside the U.S. military. Malcolm X, Dr. King, Youth Against War & Fascism, the Berrigan Brothers, Muhammad Ali and countless others left their mark on youth across the board. Rebellion was becoming a household word.

Integral to the growth of the anti-war movement in the United States military was the very critical role that Catalinotto played along with his comrade, Andy Stapp, and with the many heroic sung-and-unsung others. Black GIs, certainly not alone in this effort, are given important emphasis, for reasons the author highlights quite well. Lyndon Johnson had many sleepless nights over the war itself and the resistance. Catalinotto vividly illustrates why.

The three other historic periods focused on in “Turn the Guns Around” are the Paris Commune during the Franco-Prussian War, two phases of the Russian Revolution that ended World War I, and the African liberation wars of the 1970s and their impact on Portuguese colonialism. What ties them beautifully together are the bold examples given by rank-and-file soldiers when pushed to an intolerable wall by commanders and the ruling class!

Get your copy today and dog-ear it as much as you need to. Its wisdom will be your reward.

The words of Maj. Gen. Smedley Darlington Butler, USMC: “I spent 33 years and four months in active military service as a member of this country’s most agile military force, the Marine Corps. I served in all commissioned ranks from 2nd Lieutenant to Major General. And during that period I spent most of my time being a high class muscle man for Big Business, for Wall Street, and for the Bankers. In short, I was a racketeer, a gangster for capitalism!”

What would compel the USMC’s most highly decorated general until 1940 to reverse gears and tell the blunt truth about U.S. military designs and actions in cahoots with big business in pursuit of same: conquest and profit? Find out why in his classic work “War Is a Racket.” His observations are crystal clear, honest, combat lived. (Search the internet for a copy.) 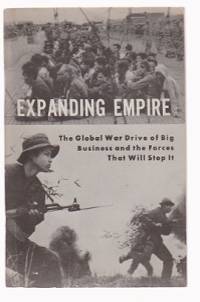 “Expanding Empire” by Vince Copeland (1967): “The flag follows the dollar and the dollar follows the flag.” Easy to read and extremely insightful, Copeland’s classic deserves continued consumption because of the simple and direct way he educates readers about the basic guts of capitalism’s internal and external machinery. Its prose is easy to understand and best summarized in the above quote, alongside the imperative that any aspiring business or industry must “expand or die.” Hand-in-glove is the incestuous relationship between big business and the military! Make reading it a 2017 goal. (Get it on workers.org under Books.)

“Generals Over the White House” by Sam Marcy (1980): The founder of Workers World Party, comrade Sam Marcy wrote this important analysis about the growing influence of the military-industrial complex in the decision-making process inside the presidential office in the post-World War II era. In effect, what the generals decide, the president signs off on, whether he or she approves or not. The generals have the mandate based on “global” needs and aspirations as instructed by imperialism.

Post Hiroshima and Nagasaki, Sam Marcy made the following observations about this dependent relationship: “The more industry, science, and technology become fused with the military, the greater the danger of war becomes. By the same token, the military in pursuit of its ends constantly needs greater and greater resources of an economic, industrial, and technological character at its disposal.”

Where are large deposits of coltan, platinum, bauxite, copper and diamonds found? Who signed off on the expansion and implantation of the U.S. military in Africa over the past eight years? And why is Trump’s cabinet ripe with generals and billionaires? Comrade Sam Marcy offers bedrock understanding. Check it out. (Find it on workers.org under Books.)