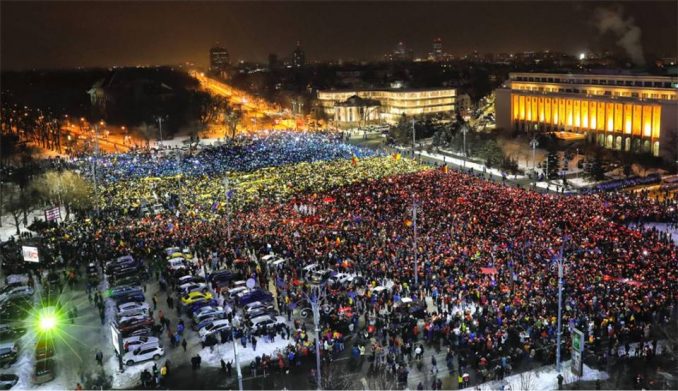 Protesters light their cellphones in colors of Romania flag.

Beginning on Feb. 1, almost half-a-million protesters gathered in Bucharest, the capital of Romania, to protest a decriminalization decree that would basically “forgive and forget” any present or future punishment for stealing funds or otherwise punish corrupt civil servants. The government, headed by the Social Democratic Party, stated the reason for the decree was that it “was needed to relieve overcrowding in Romanian prisons.”

However, the protests could be a double-edged sword for the Romanian working class.

A Feb. 7 article by Pavel Grigorchuk, a former political prisoner in neighboring Moldova and editor of Grenada.md, stated that most of the problems stem from outside imperialist influence:

“In recent years Romania has become a country that has completely lost sovereignty in foreign policy. Of all the eastern European members of the European Union, Romania most dutifully performed all the decisions of the European bureaucracy and the United States. This is proven by a wealth of evidence, including the scandal over secret CIA torture prisons, as well as the deployment of U.S. missile defense and U.S. military bases in the country,” said Grigorchuk.

“Romanian financial and political elites are willing to make any concessions to them as long as they are allowed to use the internal resources of the country for their own enrichment with impunity. In other words, the oligarchy that ruled the country for all these years was formed and strengthened with the direct connivance of the European Union and the United States.” (Grigorchuk’s full article is available in English at RedStarOverDonbass.blogspot.com.)

The fact that these military bases are close to Russia and the border with Ukraine and Moldova should give pause for thought. (See article by Manlio Dinucci in May 20, 2016, Workers World, “U.S. missiles in Romania and Poland put Europe on the nuclear frontline.”) The rampant corruption is not limited to the Social Democrats, but includes other capitalist parties.

The military encirclement of the region, along with Turkey and Bulgaria, is part and parcel of the NATO/U.S. alliance to surround Russia, which has a strategic naval base on the Black Sea. Although the events in Romania may be interpreted by some as another false flag “color revolution” instigated by the U.S., and even though the allies of the demonstrators are international financial institutions, the demonstrators have strenuously rejected attempts by any Romanian political parties to hijack the movement.

Imperialism and the Romanian ruling class are wary of further spontaneous demonstrations that might target austerity measures and worry that the mass movement might imitate what happened in Greece. Again, to quote Grigorchuk, “The liberal opposition and President Klaus Iohannis stepped up attempts to lead the protests, [but] not everyone liked it.” And, “The effort to turn the action into a rally for the National Liberal Party did not succeed.”

Although the Romanian government repealed the corruption amnesty on the sixth day of the demonstrations, the protesters have now declared that the government of Prime Minister Sorin Grindeanu should resign en masse. The maneuvers of the Social Democrats should not be seen as an attempt to gain some “independence” from imperialism, but rather an attempt to increase lining their own pockets, which was the purpose of the decree in the first place.

The decree emanated over the trial of outgoing PSD party leader Liviu Dragnea, who was convicted of electoral fraud. The “liberal” support by the U.S. and the European ruling class is more about their fear of destabilization in Romania rather than any motives for “democracy.”

After the gruesome murder of Nicolae and Elena Ceausescu in December 1989 and the collapse of the Romanian Communist Party, there has not been a revolutionary socialist movement to give leadership to the mass movement.