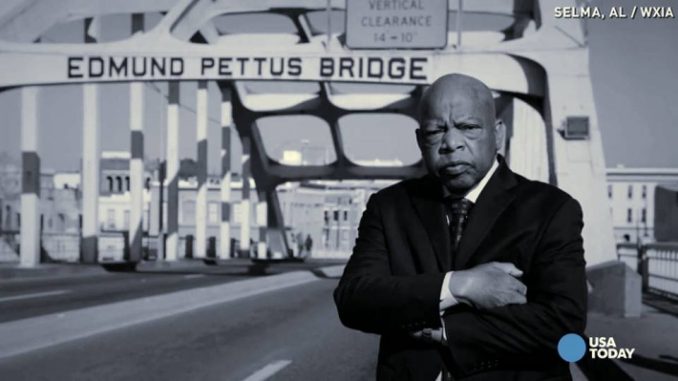 John Lewis today standing at foot of the bridge where the Selma to Montgomery march took place.

Lewis, the son of sharecroppers, was born on Feb. 21, 1940, outside Troy, Ala.  He and his nine siblings grew up on the family’s farm.  Lewis’ father saved $300 to buy the land in 1944.  At the age of 8 or 9, he said he wanted to be a preacher and began by preaching to the chickens.  He later stated, humorously, that the chickens listened better than do his colleagues in Congress.

Lewis said he wanted to attend Troy State University in 1958, and wrote to Martin Luther King Jr. asking for his help.  King sent him a bus ticket to  Montgomery.  There, they first met. When he returned home, however, his parents were fearful of him attending Troy State University, so he went to the American Baptist Theological Seminary in Nashville, Tenn., instead.

Lewis recalled going to the segregated movie theatre and schools in Pike County, Ala., and seeing “whites only” signs everywhere.  He remembered being turned away from the public library in 1956 at age 16. He was told that it was for whites only.  With a proud, ironic smile, he said that he returned to the same library in 1998 for a book signing for one of his books and got a library card.

When he was young, he was inspired by the activism surrounding the Montgomery Bus Boycott, and by the words of the Rev. Martin Luther King Jr. and Rosa Parks, whom he heard on the radio.  He decided to join the Civil Rights Movement.  From 1963 to1966 he served as chairperson of the Student Nonviolent Coordinating Committee, which he helped form.  As a student at Fisk University, he organized sit-ins at segregated lunch counters in Nashville.  SNCC was largely responsible for organizing the movement’s student activism. 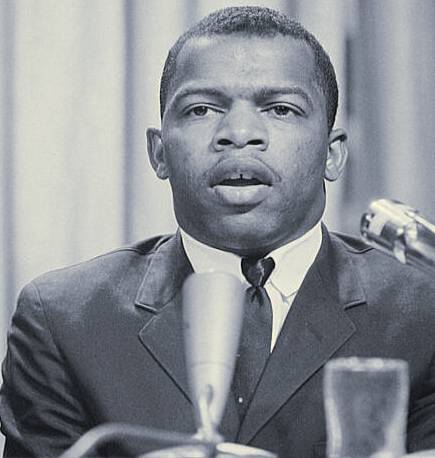 On the Freedom Rides

In 1961, Lewis participated in the Freedom Rides, which challenged segregation at interstate bus terminals across the South.  He and others risked their lives many times on these buses by simply sitting in seats reserved for white riders.  He was severely beaten by angry mobs, and burned with hot water and lit cigarettes.

Police arrested the courageous young activist for challenging the injustices of Jim Crow/apartheid segregation in the South.  In the 1960s, Lewis was arrested and jailed 40 times.

Lewis became a nationally recognized leader and was named one of the “Big Six” leaders of the Civil Rights Movement.  At age 23, he was a co-creator and keynote speaker at the historic August 1963 March on Washington.

In 1964, Lewis coordinated SNCC efforts to organize voter registration drives and community action programs for African Americans during Mississippi Freedom Summer.  The following year, he spearheaded one of the most powerful moments of the Civil Rights Movement: He and Civil Rights leader Hosea Williams led over 600 peaceful protesters across the Edmund Pettus Bridge in Selma, Ala., on March 7, 1965.

Their intention was to march from Selma to Montgomery to demonstrate the need for voting rights in the state.  However, state troopers attacked the marchers in a brutal confrontation that became known as “Bloody Sunday.”  News broadcasts and photographs revealed the senseless cruelty of the segregated South. This helped to hasten passage of the  Voting Rights Act in 1965.

Despite more than 40 arrests, brutal physical attacks and serious injuries, Lewis remained a devoted advocate of the philosophy of nonviolence.  He left SNCC in 1966 and continued his commitment to the Civil Rights Movement.  He became the director of the Voter Education Project. This organization transformed the nation’s political climate by adding nearly 40 million people of color to the voter rolls. In 1977, Lewis was appointed by President Jimmy Carter to direct more than 250,000 volunteers for the federal volunteer agency, ACTION.

‘Stand up and keep marching!’

Lewis was elected to the Atlanta City Council in 1981.  He was an advocate for ethics in government and neighborhood preservation.  In November 1986, he was elected to Congress and has served as U.S. representative of Georgia’s 5th Congressional District since then.  He is senior chief deputy whip for the Democratic Party in the House of Representatives and is a member of several congressional committees.

In speaking about the first two weeks of the fascist-like reign of President Donald Trump, Rep. Lewis stated, “There are dark days ahead.”  He urged everyone to “stand up and keep marching.  Get in necessary trouble for what’s right and just.  Don’t get weary, keep pushing and don’t go back.  Have no fear.  You can’t stop now, and don’t despair.  Anything worth having is hard, but hang in.  Forces in D.C. need to be challenged.  You cannot be silent.”

Lewis ended his remarks by saying, “I will continue to fight as long as there’s breath in my body.”