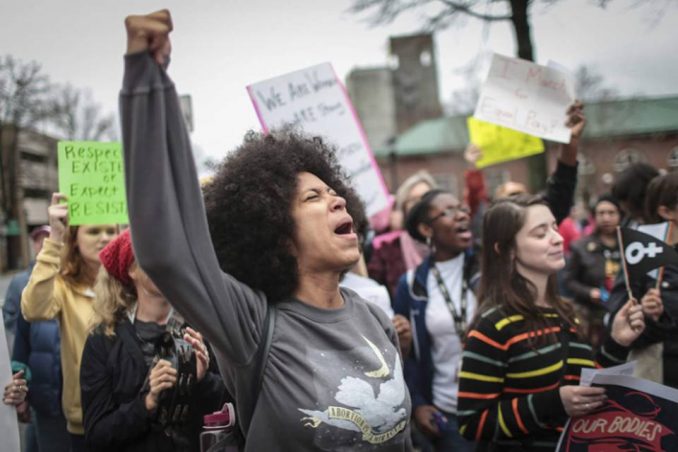 The surge in the popular movement against Trump poses both a danger and an opportunity. The danger is that it will be channeled into a harmless path of reliance on the Democratic Party and the capitalist courts.  The opportunity is for the revolutionary movement to reach out to hundreds of thousands of people, especially youth, and offer them an independent working-class path to struggle.

Feb. 6 – Donald Trump is struggling to stabilize and consolidate his authoritarian, ultra-rightist, racist, misogynistic, anti-working class regime. His government is under siege from below and criticism and legal challenge from above.

Trump is down in the polls and falling lower. He had an anemic turnout for his inauguration, which was drowned out by the national Women’s March of 3.3 million the next day. He is now reeling from the sea of demonstrations across the U.S. and worldwide hitting his Islamophobic travel ban on people from seven majority-Muslim countries.

All the countries targeted have been attacked by the Pentagon. All have either U.S. imperialist troops or Washington’s puppet forces intervening on the ground.

Excluded from the ban are Saudi Arabia, Egypt, Pakistan, the Gulf oil states, Afghanistan and Jordan. They are all props of  U.S. imperialism in the region.

The ban was temporarily halted by Seattle federal Judge James Robart on Feb. 3. After it was appealed by Trump’s Justice Department, Robart’s order was upheld by the Ninth Circuit Court in San Francisco on Feb. 5.

The inhumane ban has prevented students from returning to classes, turned away workers trying to get back to their jobs, kept families separated, harmed patients coming for medical procedures, barred doctors from getting to hospitals, and in general has caused widespread suffering.

The mass movement against the ban, the border wall and other odious parts of the Trump program has generated so much pressure that sections of the ruling class and the military, who are also being undermined by the ban, want to contest Trump’s order. They have no other way to legally intervene right now, other than through the federal court system, since the other two arms of the capitalist state, the executive and the legislative, are presently unavailable. Furthermore, the Trump administration remains hostile to the established capitalist media, has sought to discredit it and remains impervious to bourgeois media criticism.

The ban is being contested in a dozen states and by the entire tech industry, including corporate giants Google and Microsoft. Hospitals, universities, scientists and a wide section of bourgeois society have been affected.

The ban has also upset sections of the military, which continue to be fiercely engaged in a campaign to reconquer the Middle East. The ban complicates U.S. relations with puppet forces, for example, in Iraq. It also further inflames anti-U.S. sentiment in the region.

The ban affected between 60,000 and 100,000 people whose visas were revoked late at night on Jan. 27. This is, of course, a potentially impeachable offense. However, a  move to impeach is not on the agenda for now.

Building an ultra-rightist circle in the White House

It has always been the goal of the ultra-right to topple the conservative political establishment. The goal was to reduce taxes for the rich; destroy regulations on corporations; attack Social Security, Medicare and Medicaid; defeat the minimum wage; enact anti-union “right to work” laws; and so on.  This is what the Tea Party was about. Now this current is in the White House and is even further to the right.

Steve Bannon, Trump’s chief strategist, is a far-right, extremist ideologue. He ran Breitbart News online — a platform for fascist, racist and anti-Semitic elements. He is an Islamophobe, with an apocalyptic vision that includes war on China.

Senator Jeff Sessions from Alabama has been nominated attorney general. He is an arch racist who has opposed voting rights, civil rights and immigrant rights. Nominated to become a federal judge by Ronald Reagan in 1986, his virulent racism caused the Senate Judiciary Committee to reject him, only the second such rejection in 48 years.

Trump’s national security adviser, former three-star Army Gen. Michael Flynn, was ousted as director of the Defense Intelligence Agency in 2014 because he was a volatile, ultra-militaristic Islamophobe who spread false information.

This is a short list of the fringe elements who want to destroy the gains of the masses. While the capitalist establishment sympathizes with many of the goals of the ultra-right, many are fearful of a mass uprising should the ultra-right get its way.

Trump also has members in his cabinet with roots and connections to the establishment, especially the military.

Trump struggles to build base in ruling class

Because Trump is in a precarious and deteriorating position in regard to capitalist politics and corporate support, he is racing to hand out concessions to the bosses. He wants to seduce and neutralize them with rewards while putting in place his ultra-right program.

He quickly extended sanctions on Iran for exercising its right to self-defense by developing a ballistic missile. The sanctions were hailed by the entire ruling class. But he was sure to take care that Boeing was exempted from the sanctions, so that billions of dollars worth of its airliners can be produced and shipped to Iran.

He is also rewarding Lockheed by endorsing the sale of hundreds of F-35s to the U.S. government. Lockheed had long ago lowered its price for these most expensive planes in the U.S. arsenal of death, but the company allowed Trump to take credit for the reduced prices. And he signed an executive order calling for a major buildup of U.S. military forces.

One of his first acts was to issue orders to start up the Dakota Access and Keystone XL pipelines. He also cancelled restrictions and regulations on the coal industry, including a rule that protects streams from pollution caused by mountaintop mining

These were not only concessions to the fossil fuel industry. They were also aimed at building support among sections of the labor bureaucracy. He invited the building trades unions and the Laborers’ International Union to a meeting, and the bureaucrats left with praise. He also brought in leaders of the United Auto Workers and United Steelworkers to discuss NAFTA.

Sitting between Jamie Dimon, CEO of JPMorgan Chase, and Stephen Schwarzman, CEO of Blackstone, which manages $361 billion in hedge funds, Trump announced his intention to do away with the banking regulations spelled out in the Dodd-Frank bill. The regulations prevent banks from speculating with their depositors’ money. Trump is also going to do away with the fiduciary rule designed to protect workers’ pensions by preventing financial sharks from investing pension funds in risky financial institutions.

When he met with pharmaceutical industry bosses, Trump kept his mouth shut about “negotiating for drug prices,” which he had promised during his campaign. The man who “makes deals” forgot to bring it up.

This is only the beginning of Trump’s plans to destroy banking regulations while lowering taxes and restrictions on corporations in general.

Movement must stop Democratic Party from taking over

Democratic Party leaders are rushing to get in front of the burgeoning anti-Trump movement. Some have shown up at demonstrations. They are making an appeal to the movement to focus on rebuilding the party along more popular lines.

The surge in the popular movement against Trump poses both a danger and an opportunity. The danger is that it will be channeled into a harmless path of reliance on the Democratic Party and the capitalist courts.

The opportunity is for the revolutionary movement to reach out to hundreds of thousands of people, especially youth, and offer them an independent working-class path to struggle.

An example of a trap is the way the Democrats hailed the acting attorney general whom Trump fired and the dissenting letter by State Department officials denouncing the travel ban. The fact is that the State Department officials who complained about the ban were actually complaining that Trump was messing up their carefully laid diplomatic plans to strengthen U.S. imperialism’s stranglehold on the world. It had nothing to do with solidarity.

The same goes for Democratic Party leaders who have started wars, gone along with the so-called “war against terrorism,” allowed the police to murder Black and Latinx youth with impunity until the Black Lives Matter and similar movements arose, and refused to protect immigrants until the mayors of several big cities were forced to take a stand as sanctuary cities. The Democrats have let the big banks and corporations rule.

The Democratic Party is actually the enemy of the movement. Because it has a mass base, and because it is loyal to and controlled by the capitalist ruling class, it is the instrument to mislead the working class and the people.

The only way to stop Trump is to organize mass resistance on the ground, in the streets, in the communities, on the campuses, in the workplaces.

It is completely timely for youth especially to organize anti-fascist, anti-racist and anti-war fighting organizations. Even if the Trump regime is not fascist itself, it has stimulated the development and the confidence of fascist, racist and ultra-right groups all over the country. These groups pose a threat to the masses.

Trump himself has flirted with fascist symbols. He refused to denounce David Duke and the KKK. He tweeted a Jewish star with dollar signs on it. His regime refused to name Jews as part of the Holocaust and suppressed his own State Department statement on the Holocaust that mentioned the Jews. He supports the fascist Breitbart propagandist Milo Yiannopoulos, who was properly driven off the Berkeley campus. And his chief strategist Bannon is an open anti-Semite, who told his spouse during a divorce fight that he didn’t want his children going to school with Jews.

For these and a hundred more reasons, the time is now to launch a revolutionary, anti-fascist, anti-racist movement and attract the best people from this new surge of resistance to Trump.

Goldstein is the author of Low-Wage Capitalism and Capitalism at a Dead End. Both are available at online distributors.