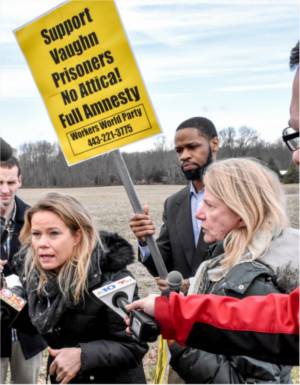 While the state of Delaware, where a prisoner rebellion has just been crushed in Smyrna, is not in the Deep South, the southern part of this small state has been a racist hell for generations.

Northern Delaware is industrialized, home to DuPont and other chemical corporate giants. As of 2012, more than half of all U.S. publicly traded companies and 63 percent of the Fortune 500 were incorporated in Delaware. The state has more than a million registered corporations — more corporations than people. All it takes to be incorporated in Delaware is a file drawer, not even an office. A 2006 survey found nearly 18,000 millionaires living in Delaware.

The southern half of this rich state, on the other hand, is mainly agricultural and poor. Workers in the large fields and poultry farms have been predominantly African American. And they have been terribly oppressed since the days of slavery.

The majority of Black people in Delaware, even before the Civil War, were “free” — free to starve, that is. “Black Americans in Delaware: An Overview” by James E. Newton explains: “The number of slaves in Delaware decreased rapidly from almost 9,000 in 1790 to half that number in 1820. By 1860, the number had decreased to 1,798. The usual explanation given is humanitarianism and religious feeling, abolitionist efforts, and runaways. In reality, Delaware farmers found it cheaper to hire free black labor than to keep slaves.

“Furthermore, Delaware, the most northern of the slave states, had no great crop of tobacco or cotton to be looked after during all seasons of the year. The land was wearing out, and state law forbade the sale of slaves out of state. Thus, slave owners could not benefit from breeding slaves as in a state like Virginia.” (tinyurl.com/jplskbr)

Delaware is one of 12 states where way more than half the prisoners are Black, even though African Americans make up only 24 percent of the population. “Judicial corporal punishment” was on the books until 1972. That’s a euphemism for floggings and the whipping post, which was used almost exclusively against Black people.

One of the main demands of the prisoners in the Smyrna rebellion was for better job training. Otherwise, they will live in deep poverty — if they ever get out of jail.