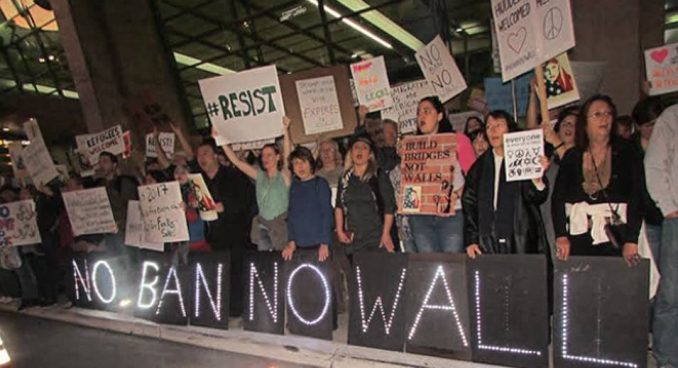 Over 2,500 San Diegans came to Terminal 2 of the city’s International Airport on Sunday, Jan. 29, to protest Trump’s ban on immigration. Local residents were there who originated from countries all over the globe: Africa, the Caribbean, the Near and Middle East, Asia, Europe and all across the Americas. Sunday was the second day of protest, and the crowd swelled from about 1,000 the day before. The overall theme was “No ban! No wall!” The most repeated chant was “No hate! No fear! Refugees are welcome here!” There was drumming, chanting and lots of moving from one side of the airport entrance to the other. Cars began to circle the airport’s arrivals and departures road with passengers holding out signs, and drivers blowing horns, expressing unity with the protesters. We would be remiss to leave out another crowd favorite: “Hey hey! Ho ho! Donald Trump has got to go!” Now the question is “What’s next?”