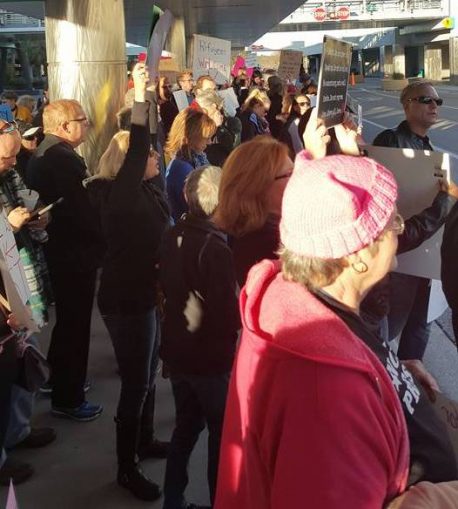 At the Pensacola airport, 300 protesters shouted “Let them in!” in support of Muslim immigrants and refugees, Jan. 29.

Chants of “Refugees are welcome here!” and “No Trump! No KKK! No Fascist USA!” could be heard in every part of the airport.  We came together to fight against the rise of fascism, racism and xenophobia.

One reporter asked, “Why is it still important you protest even though no refugees are being detained here?” This can best be answered with the Leninist rallying cry: “Workers and oppressed peoples and nations of the world, unite!”

For there to be global liberation, international solidarity between workers must be considered and practiced. That solidarity is mandatory as a path to world socialism, to stop the ongoing U.S. imperialism and colonialism in other countries, as well as the colonialism, racism and other reactionary violence within this country.

Protesters knew that, while the Pensacola Airport did not have any refugees detained, airports up North did. Hate crimes are surging everywhere. The racism, homo/transphobia and xenophobia happening in Jackson, Miss.; Birmingham, Ala.; Atlanta; Austin, Texas; Memphis, Tenn.; and Charlotte, N.C., is the racism, homo/transphobia and xenophobia being perpetuated in Portland, Ore.; San Francisco; New York City; Boston; Detroit; and Seattle.

The fact of these oppressions does not change based on geographic location — oppression is oppression!

We in the South constantly hear that our region will never change, and we should just give up. Bourgeois moderates in gentrified neighborhoods in the North and out West write us off as a bunch of “poor, uneducated hicks” without even thinking of the revolutionary work put in by Black and Brown workers and organizers in the South, the undocumented organizers, the queer/trans organizers and all others fighting against global oppression.

To write us off is to erase and ignore the work that oppressed persons put in. But I was with 300 people gathered at the Pensacola Airport to protest oppression!

And on Jan. 20 in New Orleans, Southern revolutionaries, organizers and activists shut down Canal Street, one of the the city’s busiest streets. The protest of Trump’s inauguration also shut down Magazine Street and Loyola Avenue. Over 1,000 people converged in New Orleans to protest fascism!

The South is organizing and mobilizing. We are coming for the very throat of fascism, capitalism and ruling class politics. The South will rise, but it won’t be with Confederate flags, Robert E. Lee statues and the Bible. It will be with the tools necessary to dismantle this system in order to build a workers’ world, a socialist society!

Devin Cole, a trans organizer and organizer of the Pensacola Airport protest, is president of Pensacola STRIVE (Social Trans Initiative) and director of operations for the Florida Transgender Alliance.