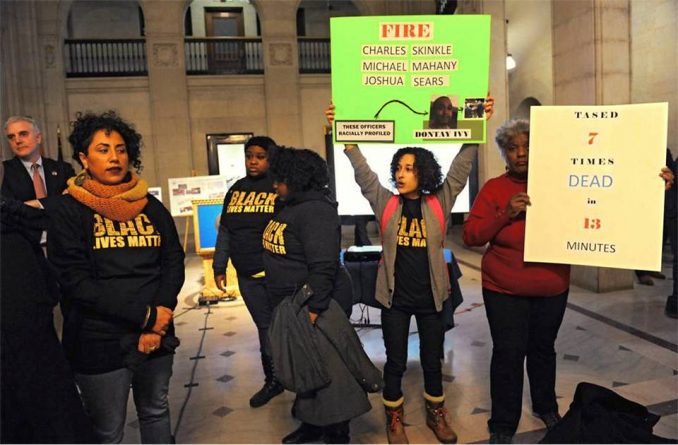 Albany, N.Y. – When Albany Mayor Kathy Sheehan gave her annual State of the City speech on Jan. 25, she was confronted by a disruptive demonstration called jointly by Black Lives Matter and the Albany Blue Collar Workers Union, Local 1961 of the American Federation of State, County and Municipal Employees. Other organizations, such as the Capital District Showing Up for Racial Justice, also participated. Despite a large contingent of cops, the protest maintained chanting and singing throughout the mayor’s speech.

On April 2, 2015, Dontay Ivy, an unarmed 39-year-old Black man who suffered from mental illness, had been taking his normal nighttime walk when he was surrounded by several Albany cops. Ivy was Tasered, clubbed and tackled. As he lay on the sidewalk, Ivy suffered a heart attack and died.

Prosecutors refused to charge the cops. None were even fired. No explanation was offered as to why Ivy was stopped in the first place.

This is the second year that Black Lives Matter activists have disrupted the mayor’s speech to demand justice for Ivy. Mayor Sheehan responded by saying: “That’s an easy solution that doesn’t actually accomplish anything. It might sound simple and it might make them feel good, but it doesn’t change a department.” (timesunion.com, Jan. 27)

The Blue Collar Workers Union has been forced to work without a contract or a pay raise since 2013. The 2017 Albany city budget offers no raises for the city’s blue- or white-collar workers, but does give a pay hike to some non-union staff, which city administrators say is necessary for them to “remain competitive.” (timesunion.com, Nov. 7)

Albany cops, however, do get their “step” pay increases in the new budget. (timesunion.com, Oct. 11)

So the chants of “No justice, No peace!” as well as “Hey! Ho! Kathy Sheehan’s got to go!” hurled nonstop at Mayor Sheehan reflected the sentiments of both Albany’s oppressed community as well as its city workers.