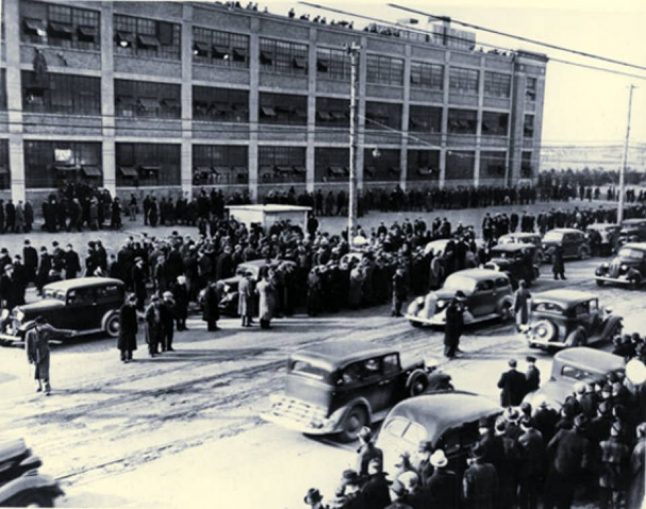 Workers occupied General Motors plants in Flint, Mich., in 1937. Over 50 GM plants with more than 125,000 employees were shut down until the UAW was recognized.

“Sit Down” by Maurice Sugar

On Feb. 7, 1937, the New York Times bemoaned the fact that workers in Flint, Mich., had “actually seized physical possession of three large factories belonging to General Motors. They occupied and held those plants by force of arms, repelling efforts to evict them and starve them out. They ejected and barred company representatives and police. And set up executive councils that ran the plants.

“Once a sit-down strike has become a state of occupation, there is little a company can do.”

Those who took the side of labor back then enthusiastically agreed. “The sit-down is labor’s weapon of economic self-defense,” stated Maurice Sugar, attorney for the United Auto Workers during the Flint Sit-down. The 44-day occupation forced mighty GM, then the world’s biggest corporation, to recognize the union.

In October of 2016, almost 80 years later, we saw the occupation tactic force the mighty Harvard University Corporation to abandon its attempt to impose austerity demands on dining hall workers belonging to UNITE HERE Local 26. As students and workers occupied the very building while negotiations were going on, Harvard was forced to grant the striking workers what they wanted. (Workers World, Oct. 31)

There is much we can learn from the sit-downs of long ago about effective tactics in today’s class struggles.

Advantages of the sit-down

Journalist and eyewitness to the Flint strike Mary Heaton Vorse wrote, “[T]here are manifold advantages for workers in the sit-down. The strikers are far less vulnerable than they are on the picket line because employers hesitate to attack the sit-downers when it may injure their own property. The sit-down effects a complete tie-up and the workers are protected against violence and strikebreakers, from cold weather and the rain. The plant is completely closed and scabbing is impossible; as a training ground for education, it is far better than the ordinary strike.”

Events bore this out. From 1929 to 1936, at least 96 workers in the U.S. were killed on picket lines. This figure does not include 15 shot down in marches of the unemployed, including five killed during the Ford Hunger March by Ford’s notorious “Service Department.” Nor does it include Ralph Gray, the Black leader of the Sharecroppers Union lynched in Alabama, or two Filipino cannery workers’ leaders shot inside a Seattle restaurant, and other martyrs too numerous to mention.

By contrast, of the hundreds of U.S. sit-downs that took place from 1935 to 1937, only 25 were physically attacked, and there were no fatalities.

In every case, strikers returned to work with a newfound sense of power. For example, in 1935 an Akron rubber worker wrote to the local newspaper about his dreary existence, concluding, “We’ve nothing to look forward to. We’re factory hands.” But after one of many successful sit-downs, another Akron rubber worker proclaimed, “Now we know our labor is more important than the money of the stockholders, than the gambling in Wall Street, than the doings of the managers and foremen.”

Almost 50 years after that sit-down strike wave, Sam Marcy wrote in “High Tech, Low Pay” that a workplace occupation “can change the form of the struggle, take it out of its narrow confines and impart to it a broader perspective. In truth, it brings to the surface a new working-class perspective on the struggle between the workers and the bosses. It says in so many words that we are not tied to a one-dimensional type of struggle with the bosses at a time when they have the levers of political authority in their hands.”

Marcy keenly observed the impact of high technology on the working class, anticipating its ravaging effects and looking for methods of struggle that would give exploited labor its greatest advantage. Towards this end he drew upon the accumulated lessons of the sit-downs.

The bold strike tactics, including occupations, that workers used to win against the Harvard Corporation confirm the potential of sit-downs and occupations as struggle-expanding strategies.