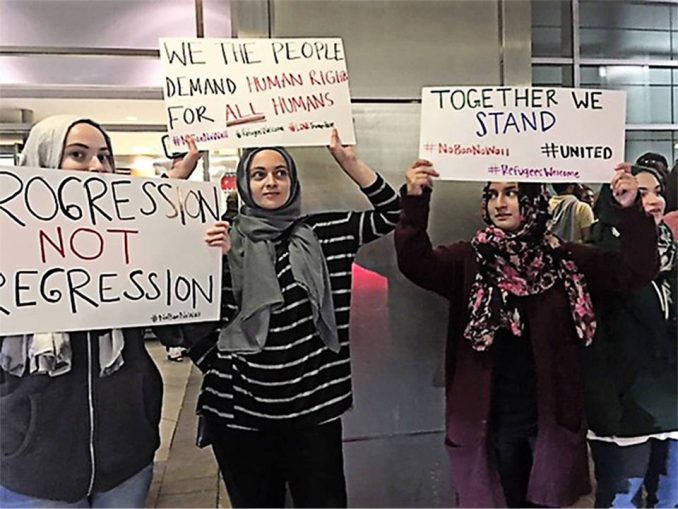 Jan. 30 — The wave of airport protests against Trump’s Muslim ban represents a new high-water mark in solidarity with Muslims in the U.S. These demonstrations are a political rebuff to the vicious Islamophobia stoked for a year and a half by Donald Trump, along with his Mexico bashing and many other reactionary themes.

In fact, Islamophobia has replaced anti-communism in the 21st century as the primary divisive, racist, divide-and-conquer strategy to foment war, intervention and police surveillance. Now the Islamophobes are being pushed back.

Since Sept. 11, 2001, and the World Trade Center bombings, Muslims and those in the movement who support them against ruling-class prejudice and persecution have been on the defensive. Solidarity activities have been relatively small and have been in the shadows.

This reactionary White House circle apparently did not get the message from the 3.3 million people who demonstrated around the country on Jan. 21 at the Women’s March. That march was marked by a high degree of solidarity with Muslim women. Instead, Trump and his reactionary circle, which is moving sharply in an authoritarian direction, provoked a massive movement that was already in motion.

As of this writing, 100 demonstrations in 42 states have been carried out or are planned. Tens of thousands have already gone to airports to protest. (getgroundgame.com/airportprotests)

Television networks have carried the larger, more prominent ones in New York, Los Angeles, Dallas-Fort Worth, Chicago, Boston, Atlanta and so forth.The movement has been powerful enough to force courts in four states to put stays on the deportation of immigrants caught up in the ban and its sudden application. Requests for injunctions have been granted in New York City, Seattle, Virginia and Massachusetts. The Massachusetts injunction goes further than the others, which block deportation but permit detention. Massachusetts is not allowing detention.

The original ban included all people with green cards. This amounts to a ban on hundreds of thousands of people around the world. In their rush to push the ban through, Trump and his National Strategy Adviser Steve Bannon, an ultra-right, Islamophobic, anti-Semite, informed U.S. Customs and Border Protection and Immigration Services of the ban on the very afternoon it was promulgated. Only the massive struggle that erupted at airports the next day forced the head of Homeland Security, Gen. John Kelly, to rescind the green card ban.

In their fanaticism Trump, Bannon, Reince Priebus, Flynn and company showed no concern for all the students from the seven Islamic countries covered by the ban who were returning to continue their studies. They did not care about workers, scientists and technicians returning to their jobs. They showed utter contempt for people coming to be with their families. Even after several court injunctions were obtained, CBP officials refused to allow attorneys to see some detainees and turned away members of Congress who were attempting to find out the status of those detained.

This reflects the authoritarian stamp of the Trump inner circle.

The legal struggle to eradicate the ban altogether has a long way to go. It will take a great deal of political struggle in the streets, on the campuses and in the communities to push back the Trump administration. But the struggle has begun in a very inspiring way.

A new sense of solidarity has swept the movement, which got a sense of its power at the J21 Women’s March. That power has been transformed into solidarity and militant rejection of Islamophobia.

Anti-Muslim sentiment has been a fundamental ideological and political prop of the ruling class and much of the political establishment since Sept. 11.

By coming out en masse across the country, the airport demonstrators have put up determined resistance to the Trump refugee ban. But they have also struck an ideological and political blow against the Islamophobic poison of the ruling class. These demonstrations have laid the basis for future political steps forward.

Under the pretext of the “war on terror,” U.S. imperialism and the Pentagon have intervened in Afghanistan, Iraq, Libya, Syria, Somalia and lately in Yemen. The military-industrial complex — the makers of drones, smart bombs, military satellites, bombers, fighter planes, helicopters, tanks, munitions of every kind, military robots, etc. — have prospered producing arms for the “war on terror.”

From solidarity to anti-imperialism

The solidarity shown with Muslims can cause many to question the ideological and material basis that led to the ban in the first place. It is supposedly to protect the U.S. against terrorist organizations like al-Qaida and the Islamic State group (IS). But the ban is part of a broader offensive against the oil-rich and geostrategic Muslim world of the Middle East and North Africa.

It is precisely the Pentagon and the CIA that are responsible for the rise of groups like al-Qaida and IS. Washington has bombed 11 Islamic countries in the last 25 years. The Pentagon has inflicted untold destruction, suffering and death upon countries from Afghanistan to Somalia. The CIA has destroyed all the progressive secular nationalist forces, all those openly anti-imperialist, all the socialist and communist forces in the Middle East.

But the imperialists have not stopped their plunder and their oppression. They have taken Iraq’s oil. They have destroyed Libya and taken its oil. They have financed a devastating war trying to topple the independent government of Syria. The region is strewn with millions of refugees escaping the destruction of drone warfare, F-16s, A-10 killing machines. The oil barons are searching and drilling for oil in the coastal areas of Islamic North Africa. U.S. troops are spread throughout the region.

Under such conditions, with all progressive and secular forces weakened if not destroyed, it is inevitable that the vacuum of resistance will be filled by reactionary forces. The IS group is a patriarchal, medieval, theocratic organization pledged to drive the Western powers from the Middle East — the powers that divided up the region in the first place.

Such forces are at the same time the enemy of both the masses and of imperialism. The “war on terror” has nothing to do with helping women or freeing society. It has to do with reasserting the dominance of imperialism over the oil-rich Middle East and Africa.

Along with fighting Trump and his ­reactionary anti-Muslim tirades, the movement should try to match its dynamic political resistance with a determination to get to the bottom of the problem. The movement must see the commonality of racism, misogyny, LGBTQ and all gender oppression, anti-immigrant poison and the struggle against the multinational working class as based in the same substance as Islamophobia.

At the root is imperialism, the profit system and the domination of the world by capitalist monopolies.

Goldstein is the author of ­“Capitalism at a Dead End” and “Low-Wage Capitalism,” both of which can be purchased from online booksellers.