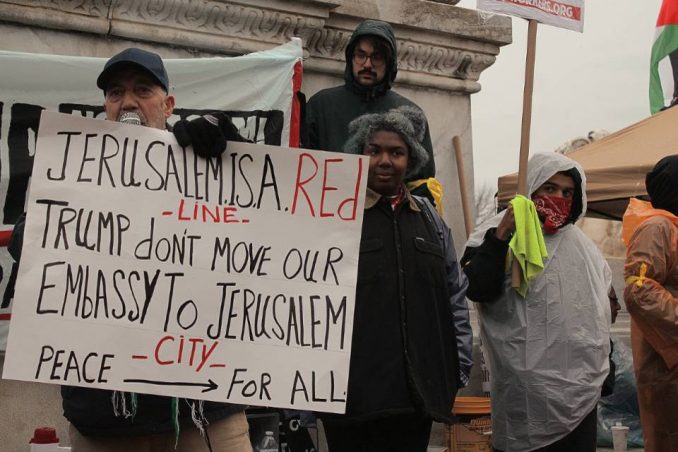 As thousands of demonstrators poured into Washington, D.C., to protest the presidential inauguration of Donald Trump, Palestinians mobilized across their occupied country against his pledge to move the U.S. Embassy in Israel to ­Jerusalem.

Successive U.S. administrations have supported, with billions of dollars in annual aid, Israel’s occupation of Jerusalem along with the rest of the Palestinian land seized by Israeli forces in both 1948 and 1967. But they have refused to formally recognize Israel’s territorial claim to the city.

That could change under Trump, as the new president has repeatedly promised to relocate the embassy from its current site in Tel Aviv. This action would end an international diplomatic consensus that officially considers Jerusalem’s status an unresolved question for future negotiations.

Rallies supported by factions across the Palestinian political spectrum started in the West Bank on Jan. 19, with hundreds gathering in the cities of Ramallah, Nablus and al-Khalil.

On the morning of Jan. 20, Israeli forces attacked a protest near Israel’s notorious “apartheid wall” in Bethlehem, where Palestinian youth activists burned pictures of Trump. Other demonstrators erected the Bab al-Shams, or “Gate of the Sun,” an encampment of protest tents at the illegal Israeli settlement of Ma’ale Adumim outside Jerusalem.

Weekly marches in the villages of Bil’in and Kafr Qaddum, as well as a rally by the Palestinian Islamic Jihad movement in Gaza, similarly opposed the move.

Along with Trump’s threat to the status quo in Jerusalem, Palestinians say these measures could spark massive opposition, both by those under Israel’s occupation and by all across the Middle East.

The Council of National and Islamic Forces, a coordinating body of all Palestinian factions, warned in a Jan. 21 statement that the relocation would “ignite a fire in the region” and demonstrate the U.S. government’s “full partnership with the open war against our people.”