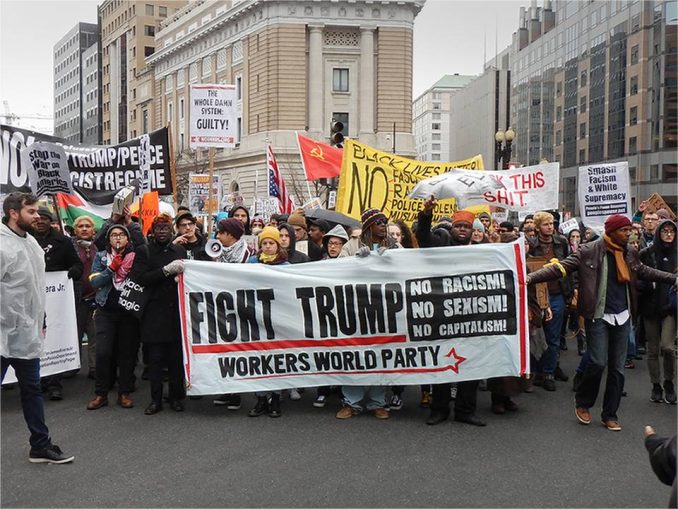 Tens of thousands of people, unable to get to Washington, D.C., for the anti-Trump demonstrations there, took to the streets in their own cities on Jan. 20 as part of a national call for counterinauguration actions.

In New York City a Black, Brown and Indigenous peoples’ mobilization against white nationalism was held in Harlem at the Harriet Tubman Memorial. Rally organizers said they came out “to say no to racism. To say no to gentrification. To say no to white supremacy. To say no to Donald Trump.”

The action was organized by a coalition of activists, including Why Accountability, People’s Power Assemblies, NYC Shut It Down, Jails Action Coalition, Black Lives Matter, #J20Resist Labor, Standing Rock activists and the International League of Peoples’ Struggle, among others. Children just getting out of school were invited to join the march, and many did.

Following the rally, activists marched across 125th Street, stopping outside gentrified shops and calling out the police for their racist tactics. From there the rally proceeded to Trump International Hotel in Columbus Circle.

Jersey City People’s Alliance. They marched from Journal Square to City Hall, past Dickerson High School, where they got a very positive response.

Hundreds of protesters marched through downtown Buffalo to reject Trump’s inauguration and to stand up against war, racism, sexism, anti-immigrant and anti-LGBTQ bigotry. Loud chants of “No Trump! No KKK! No racist USA!” were met with honks from vehicles and cheers from passersby. Many placards and speakers raised up Black Lives Matter and urged the need to organize, fight back and unite in solidarity actions. The action was called by Buffalo Anti-Racism Coalition, co-sponsored by the Buffalo International Action Center and joined by the #UB Sanctuary Campus Movement.

Chanting “Not my president,” hundreds of protesters took to the streets of Philadelphia in several actions that included student marches from Temple University and the Community College and rallies at Thomas Paine Plaza and Independence Mall. A variety of organizations participated, including Philadelphia Coalition for Racial Economic and Legal Justice, Temple Feminist Majority and Socialist Alternative. Immigrant rights groups and their supporters rallied on Independence Mall, denouncing Trump’s threats against immigrant communities and calling for Philadelphia to remain a Sanctuary City.

At the University of Pennsylvania, where Black students were targeted by racist email threats shortly after Trump’s election, several dozen students gathered in the rain for a protest.

In Blacksburg, Va., members of numerous labor, community and student organizations participated in a daylong Inaugurate Resistance event. A series of workshops took place at the Lyric Theatre, followed by a street vigil and march of hundreds through downtown. Major organizational support came from the Coalition For Justice and professors, staff and students from Virginia Tech University.

Some 500 marchers stepped off from Troy Davis Park (aka Woodruff Park) in downtown Atlanta in an unpermitted, loudly defiant protest named The People’s Inauguration. Initiated by organizations representing those most targeted by racist, anti-immigrant, sexist, anti-LGBTQ and Islamophobic laws and practices, the Georgia J20 Coalition came to include faith, community and labor groups as well.

The chanting, drumming crowd passed through downtown shopping areas, went by Immigration and Customs Enforcement offices and stopped briefly at the Atlanta Detention Center, where hundreds of poor and working people are jailed and dozens of undocumented immigrants await deportation.

The march concluded with a rally on the steps of the Atlanta City Hall. A cross-section of speakers outlined 19 demands to Mayor Kasim Reed and the City Council to enact measures that would guarantee human rights for all who live and work in the city.

The action was designed to serve as the launch of invigorated resistance to any attacks — whether from the Trump administration or from state and local entities — on the rights of workers, women, LGBTQ, immigrants, Muslims, poor, homeless and disabled communities.

Members of the Milwaukee Coalition Against Trump and many other organizations took to the streets to resist the Trump agenda. After a militant rally at Red Arrow Park, the multinational protesters, with bilingual English and Spanish lead banners, marched through downtown Milwaukee. Red Arrow Park is where Dontre Hamilton was murdered by Milwaukee cop Christopher Manney on April 30, 2014. The Wisconsin Bail Out the People Movement participated in the J20 action with their banner, reading “Build A United Front Against Trump.”

Hundreds participated in the J20 demonstration in Madison, ., in which participants marched from Library Mall to the state Capitol. Speakers before and after the march touched on topics ranging from the wars in the Middle East, the colonial oppression at Standing Rock, workers’ rights, why Black Lives Matter is essential to the struggle in Wisconsin, women and LGBTQ struggles, and the need to fight back against the bigoted Trump administration every day.

Around 7,000 demonstrators converged on Trump Tower in Chicago and marched through the Loop (the downtown area). Participants included Rasmea Odeh, a Palestinian freedom fighter whom the federal government is trying to deport on trumped-up charges.

In Seattle actions countering Trump’s inauguration began with student walkouts at a number of high schools across the city. A walkout was also held by students at the University of Washington, who also conducted a teach-in.

That afternoon a “Unidos Contra Trump” march, called by El Comite/May 1st Action and Socialist Alternative, tied up traffic in the downtown area. Rallying at City Centre, the crowd grew to 5,000. Twelve immigrant students from Foster High School described being terrorized by Homeland Security and Immigration and Customs Enforcement. Nicole Grant, of Seattle’s Martin Luther King County Labor Council, said, “Since the Eastside Islamic Center got arsoned and burned to the ground, labor is going to step up and help them rebuild!”

Protesters then marched six miles to the University of Washington campus to confront Milo Yiannopoulos, an editor of Breitbart News, who was giving a bigoted, racist speech there. A protest by other anti-racists had already kept attendance low in the hall where he spoke. Cops had to escort him and his audience out through an underground parking garage.

Pioneer Square in Portland, Ore., was overflowing with upwards of 30,000 demonstrators, who rallied in defiance of the Trump inauguration. The crowd cheered, jeered and empathized as a diverse group of local organizers condemned austerity, patriarchy and white supremacy.

Speakers encouraged resistance to capitalism, fascism, the Trump-Pence regime and offered resources to the community. As word spread that police were arresting those with their faces covered, many others covered their faces in solidarity. Demonstrators, including protesters young and old and people with disabiliites, marched miles of center city streets without a permit. Local police shadowed the march on bicycle, while lines of state-paid employees, in full riot gear, blocked intersections to redirect the route into Old Town Portland.

In Los Angeles a Unite Against Hate march and rally was organized by many organizations determined to send a message of defiance against Trump’s racist, anti-immigrant, anti-Muslim and anti-woman agenda. Many were also in opposition to the imperialist policies of U.S. wars, proxy wars, occupations, and racist agendas enforced by both Republican and Democratic parties.

An anti-imperialist contingent was organized by the International League of Peoples Struggles that included the International Action Center; Human Rights Alliance; BAYAN-USA and its member organizations; Committee in Solidarity with the People of El Salvador; Chinatown Community for Equitable Development; and more.

Earlier in the day the Community Service Organization, Black Lives Matter and other groups protested in Bel Air at the home of Trump’s cabinet pick for Treasury Secretary, Steven Mnuchin. Protesters were met with helicopters and police who said they had no right to protest. The cops claimed that the entire town of Bel Air was “private property.” However, the protest continued, and later some of the groups met up with the main march in downtown Los Angeles.

At the concluding rally, Romeo Hebron, representing BAYAN-USA, spoke on building a people’s movement against the imperialist policies of both Democrats and Republicans, and on being in solidarity with struggles from the Philippines to Palestine. to struggles here in the U.S. against poverty and repression.

Rebecka Jackson, a member of Workers World Party representing the International Action Center, raised the need to be anti-imperialist and anti-capitalist. She stressed the importance of connecting struggles and bringing together communities of color, women, LGBTQ people, youth and students, immigrant and workers’ organizations in order to build a progressive movement for social justice and change — and to work toward the liberation of all peoples living in the U.S. and around the world.