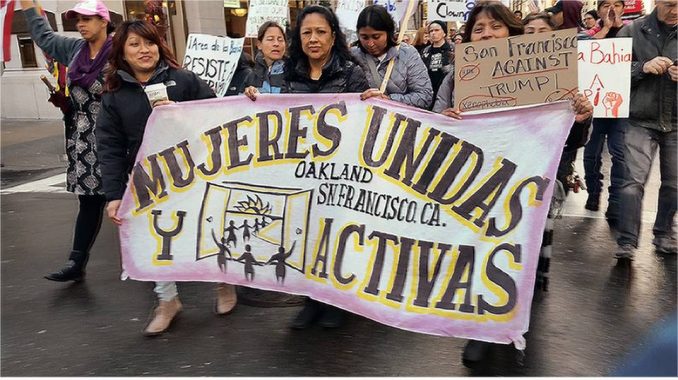 Twenty-two actions were listed on the APTP Spokescouncil calendar from after the MLK march to J20, with another 13 actions for the Jan. 20 counterinauguration protests alone. The list did not include a number of more clandestine actions, described below, which were not posted. 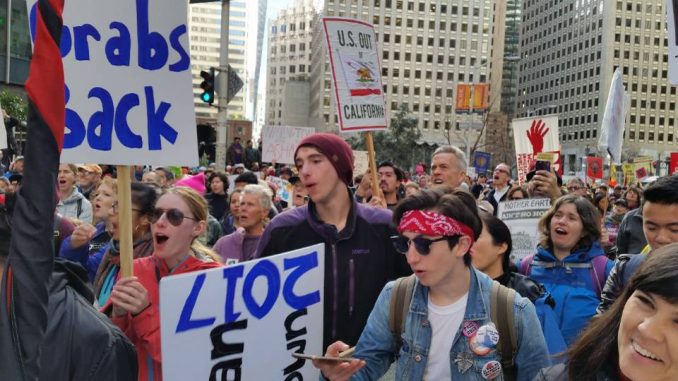 A few of the mid-week events were:

Wednesday: Chairman Fred Hampton Jr. made a special presentation to the APTP general membership meeting in Oakland on “Organizing in the Age of Trump.” He spoke on the importance of analyzing events from the perspective of those whose interests are affected versus those who stand to gain. He talked about why he calls his hometown of Chicago, Chiraq (Chicago/Iraq), due to police militarization against the Black community.

Thursday: Disclose, a transgender-inclusive Bay Area art-activism collective dedicated to facilitating active engagement in the eradication of sexual violence, culture and sexual assault, held a “We Will Not Be Silent” action. About 75 sexual abuse survivors and supporters marched from Oakland City Hall to the Oakland Police Headquarters. A videotape of survivors — of sex trafficking, domestic violence and gender-focused violence — speaking against their abusers was projected on the OPHQ wall. The Oakland Police Department is notorious for its officers caught repeatedly last summer trafficking a minor. In a threatening duplication of the patriarchal behavior of the typical abuser, OPD helicopters flew low over the march, impeding attendees’ abilities to hear speakers. The OPD also brought in two L-RAD sound cannons, a military weapon used to injure the ears of enemies.

Thursday: A Noise Demo was held at Santa Rita Jail in Dublin, where a major expansion for a prison “mental health wing” is planned. Protesters held signs reading, “Money for mental health, not jails or prison cells” and “House keys, not handcuffs.”

Friday: On Jan. 20 the Bay Area lit up with actions. The day started early in San Francisco, where APTP coordinated with the Bay Area Solidarity Action Team (which has a number of affinity groups) to send the message that there would be no business as usual, beginning the day of Trump’s inauguration.

In Berkeley a crowd of more than 1,500, primarily students and other youth, filled Sproul Plaza at the University of California at noon to oppose the Trump agenda. Speakers included two teenage students from among the many who had walked out of Berkeley High School that day. One young woman speaker said, “Don’t tell me I can’t love my girlfriend!” Signs included, “I will not stop fighting you,” “No fascist USA” and “Art historians against Trump.” A young Black man led the crowd in chanting, “Black Brown unity! This is the place for Sanctuary.”

Several longshore workers from International Longshore and Warehouse Union Local 10 attended the rally, announcing that their local had shut down all Bay Area ports to express their opposition to Trump. Several speakers from Labor Rising Against Trump addressed the rally, including Juan Garcia, a university employee, and Alborz Ghandehari, a leader in the fight for required Ethnic Studies in the UC system. After the rally, the crowd marched on Telegraph Avenue to downtown Oakland to join other protests there.

In Oakland at Oscar Grant Plaza, there was a Mutual Aid Fair in the morning, a “March of the Working Class” up Broadway and down Telegraph, and then a speak-out for students in the afternoon.

Contributors to this article included Tristen Schmidt and Dave Welsh.