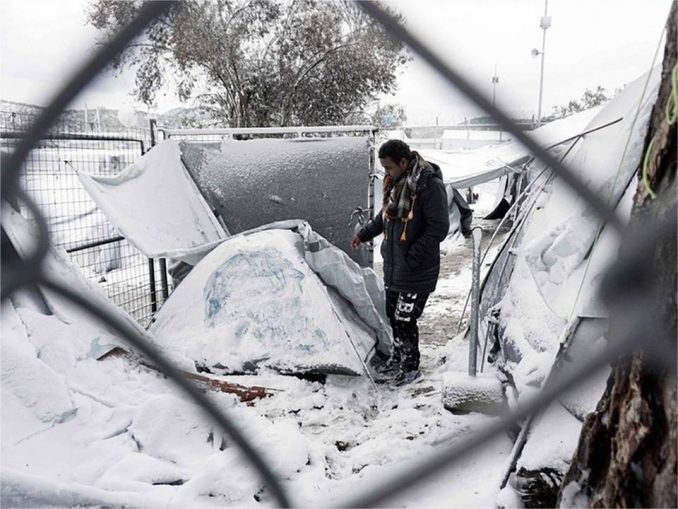 Refugee camp in Moria, the isle of Lesbos, Greece.

From 2015 through 2016, nearly 1.7 million people took a dangerous, expensive and often deadly voyage to enter Europe as refugees, according to the United Nations High Commissioner on Refugees. The UNHCR estimates that over 5,000 people died in the Mediterranean Sea trying to get to Europe in 2016. Recent reports suggest that crossing the Sahara Desert is nearly as dangerous.

These refugees are fleeing either war or climatic disasters, or perhaps both, in their countries of origin: Syria, Afghanistan, Iraq, Pakistan, Eritrea, Nigeria. Some of them have walked for months, being robbed by cops and bandits, fleeced by human smugglers, and sometimes helped and aided by people in the countries they passed through who were touched by their plight and their desperation.

In Europe, they encountered fences and closed borders, exclusions and mass roundups, and bureaucratic delays in processing their applications. Some sympathetic individuals and small groups gave them food, clothes, basic necessities of life. Governments that didn’t want “this problem” put refugees in tents and camps with no heat for cold weather.

By an accident of geography, many of these refugees — 65,000 or more — wound up on some Greek islands lying close to Turkey. They were supposed to be transferred to other European Union countries but there was a large amount of foot dragging by those entities. Women and children were put in summer hotels, the men and older boys — many of the refugees are unaccompanied minors — were put in small tents. None of that housing had heat for winter.

So the Greek government and the refugees were totally unprepared for the extreme cold and heavy snows that hit Greece and much of Europe in December 2016.

Diane Sampson, an American pediatrician, has had to treat patients suffering from frostbite at the Moria camp on the island of Lesbos. The heavy snow has caused some tents to collapse. All the tents are leaking and standing in cold water. The refugees have no way of drying their clothes and bedding.

“In a situation like that our main responsibility is to look at these human beings and treat them like human beings. This place lacks basic human dignity,” she told the Thomson-Reuters Foundation on Jan. 13.

While all the EU governments are treating refugees that enter their territory inhumanely, France stands out as particularly brutal. France is a much wealthier country than Greece and it is also experiencing extreme cold and snowy weather.

In the past, when Paris’ refugee center was full, refugees slept in tents scattered near metro stops. Then the cops would seize their tents. When refugees began using blankets to stay warm, cops seized the blankets.

When Médecins sans Frontière [Doctors Without Borders] pointed out the risk of hypothermia for some of its refugee patients, Bruno Le Roux, the minister in charge of the police in France’s so-called Socialist government, said, “It’s necessary to stop this national sport of challenging cops.” (francetvinfo.fr, 1/8)

European countries with deep and profitable ties to Iraq, Afghanistan and Syria, a former French colony, are quick to criticize those governments for creating the refugees washing up on Europe’s shores. But the EU countries conspicuously refrain from criticizing themselves for how they treat the refugees they have created.

Instead, if the United States and its European allies ended their wars on Syria, Iraq and Afghanistan, if the money spent on those wars went to rehabilitating and restoring the ravaged areas, if some of that money went to reverse the climate change devastating sub-Saharan Africa — then the people who have been forced to flee and become “refugees” could return to their homes.

Meanwhile, trapped in the EU’s winter, the people struggle to survive the cruel freeze.