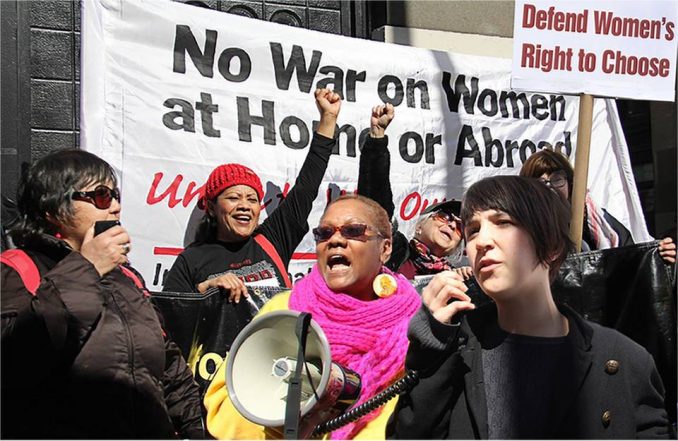 The Women’s March on Washington on Jan. 21 has issued unity principles defining what it stands for. Included in eight rights are those for workers, immigrants, LGBTQIA communities, people with disabilities, environmental justice, civil and reproductive rights, and ending violence.

The march statement on reproductive freedom begins, “We do not accept any federal, state or local rollbacks, cuts or restrictions on our ability to access quality reproductive healthcare services, birth control, HIV/AIDS care and prevention, or medically accurate sexuality education.”

The statement concludes: “Recognizing that women have intersecting identities and are therefore impacted by a multitude of social justice and human rights issues … [we] must create a society in which women — in particular Black women, Native women, poor women, immigrant women, Muslim women, and queer and trans women — are free and able to care for and nurture their families, however they are formed, in safe and healthy environments free from structural impediments.”

That affirmation of reproductive justice is welcome since the next day, Jan. 22, is the 44th anniversary of the Supreme Court decision legalizing abortion, Roe v. Wade. Roe’s very existence is now in jeopardy given the aggressive anti-woman, anti-abortion stance of the Trump-Pence administration and the right-wing-controlled Congress.

The House of Representatives passed the first step in repealing the Affordable Care Act on Jan. 13, which affects millions of working people, especially women of child-bearing age whose contraceptives were paid for under the law. (See editorial.) The same day Rep. Steve King (R-IA) introduced a national law to ban all abortions.

The major federal ruling that currently restricts Medicaid and Title X payments for abortions for poor women is the Hyde Amendment, in effect since 1976. (See Jan. 5 WW.)

Attacks in the states

According to the Guttmacher Institute, 18 states in 2016 enacted 50 new restrictions on abortion. That brings the total of restrictions enacted since 2010 to 338.

Now 14 states, mostly in the South and upper Midwest, have 20-week bans on abortion. Twenty weeks is the time when anti-choice adherents claim a fetus can feel pain, though that has been debunked by the Central Association of Obstetricians and Gynecologists. According to NARAL Pro-Choice America, no laws have an adequate exception for women’s health.

Some states have adopted extreme laws. Texas passed one in 2016 that mandates burial or cremation of embryonic or fetal tissue from abortions, miscarriages or ectopic pregnancy surgery, regardless of the woman’s wishes. The Center for Reproductive Rights filed a lawsuit Dec. 12, arguing that “restrictions cannot impose burdens on a woman’s right to access abortion care without providing any medical benefit.” (Rewire, Dec. 12)

New Idaho state Sen. Dan Foreman intends to introduce a state bill that any woman who has an abortion or a doctor who performs one will be charged with first-degree murder. The only exception is if the woman’s life is in danger. (www.mcclatchydc.com, Jan. 11)  Guttmacher confirmed this is a first in the U.S.

Ever since the selection of the Trump ticket, abortion rights organizations and advocates have been mobilizing. Many such groups will be marching on J21 in D.C. and hundreds of U.S. cities, along with many women who have never marched before.

All* Above All will be there with its new campaign: “We will be Bold, We won’t be Punished.” A*AA was started by young women and women of color in 2014 to overturn the Hyde Amendment, which discriminates against poor women — predominantly women of color, youth, immigrants, rural residents, women with disabilities and survivors of domestic violence. At a press briefing on Jan. 12, A*AA co-director Destiny Lopez stressed, “The fight to lift coverage bans cannot be divided from the broader struggle for abortion access.”

Amy Hagstrom Miller, CEO of Whole Women’s Health, a plaintiff in last year’s Supreme Court case, pointed to the recent hike in the maternal death rate in Texas after laws forced reproductive health clinics to close. She predicted that if the anti-woman agenda exists on the federal level, “we will see more negative outcomes for women’s health.”

“What happens in the next four years could affect Latina health for decades,” said Jessica Gonzalez-Rojas, executive director, National Latina Institute for Reproductive Health. Speaking for Latinas and their families, especially immigrants, she said, “That’s why we’re building our power, super-charging our activism, and forging new cross-movement relationships.”

Yamani Hernandez, executive director, National Network for Abortion Access, wrote in a Jan. 4 email to supporters, “As we kick off 2017, let’s draw strength from each other. … Let’s march forward together, with our voices, with our donations, and with our love. … Let’s build power.”

Why we must fight back

All the attacks on abortion from the Trump-Pence administration and right-wing Congresspeople are part and parcel of a reactionary turn to the right. Trump, his government and many of his followers want to return to the 19th century — to racist segregation, white supremacy and lynchings; no unions defending workers’ rights;  no laws promoting clean air, water and a healthy environment; LGBTQ people jailed for expressing their desires; and women unable to vote, have legal rights, access safe abortions or lead independent lives.

As well as being Commander in Chief, President Trump should be called Patriarch in Chief. Smashing patriarchy should be high on our agenda.

Frederich Engels explained how patriarchy arose at the dawn of history in “The Origin of the Family, Private Property and the State.” Primitive communism evolved from separate roles for the sexes — women cultivating crops close to home and children, while men hunted and fished — into “the historic downfall of the female sex.” As men’s domestication of herds of animals increased their power and property, they wanted to bequeath wealth to their progeny. So women’s social and economic role was subordinated to men’s, and with private property came classes and patriarchy.

It’s time for thorough-going revolutionary change. Not only do we need to fight Trump’s backward agenda, which only benefits millionaires and property owners, we need to link arms with all our sisters and brothers and form a united movement that guarantees all the rights affirmed by the Women’s March. It’s time for a revolutionary women’s movement that fights for full women’s liberation.