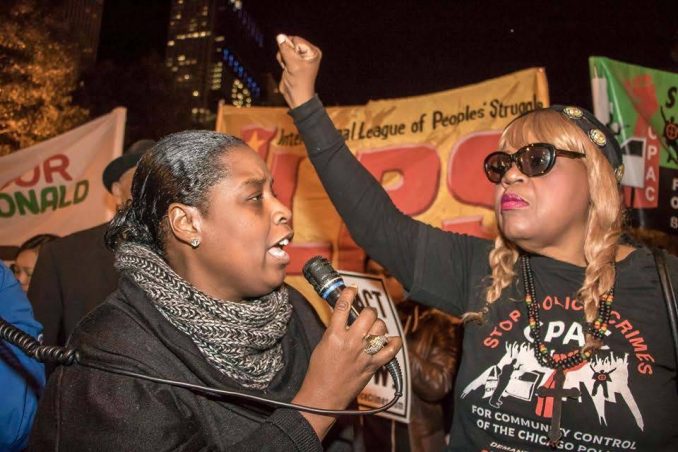 Demanding justice for Laquan McDonald on the second anniversary of his murder by Chicago police.

It took the U.S. Department of Justice 13 months to determine what everyone in Chicago already knows — that the Chicago Police Department (CPD) is brutal and racist.  In a scathing, 164-page report issued on January 13, the DOJ concluded that routine use of excessive force by the country’s second largest police department violates constitutional rights.

The DOJ report was triggered by public outcry after the release of a dashcam video showing white cop Jason Van Dyke fatally pumping 16 shots into unarmed Black teenager Laquan McDonald in 2014.  Without the protests of Black Lives Matter and its allies after McDonald’s murder, the DOJ investigation never would have been initiated.

The report finds that excessive police violence is employed most often against people of color.  Police are ten times more likely to use excessive force against African-Americans and Latinx people than whites, while complaints from whites are far more likely to be sustained.  Black youths told the DOJ that Chicago cops routinely spew racial epithets and “patrol our streets like they are the dog catchers and we are the dogs.”

The report also shows that CPD’s “code of silence” regarding fellow officers’ misconduct is “a deliberate, fundamental and corrosive violation.”  The McDonald video clearly displays that code of silence in action, showing Van Dyke’s colleagues immediately moving into cover-up mode to protect him after the shooting.

There is no accountability for such misconduct.  Prior to the McDonald scandal, the Independent Police Review Authority had almost never found a shooting unjustified.  The report finds that IPRA investigators routinely fail to speak to witnesses, turn a blind eye to blatant inconsistencies in incident reports and effectively presume lack of officer wrongdoing.

Political forces behind the police

The DOJ report is unlikely to lead to any fundamental change in police practice.  At most, it initiates a lengthy process that may culminate in a consent decree to reform training, accountability and use-of-force standards.  Although Chicago Mayor Rahm Emanuel pledged to negotiate such a decree, he and his cohorts are the very officials who consistently have conspired to cover up police misconduct.  Their promises are likely to prove just as hollow going forward.

Issuance of the DOJ’s report just a week before a change in presidential administrations undermines any faith in the sincerity of its proposals.  Incoming President Trump was heavily endorsed by police “unions” and other “law and order” lobbyists.  He has called police “the most mistreated people in the country” (a truly through-the-looking-glass view of the world).

These statements indicate that the Trump administration will oppose attempts to reduce police violence, making enforcement of any Chicago consent decree a poor prospect.

In any event, the reforms suggested by the DOJ, even if implemented, would not stop racist police violence.  Despite training and other reforms supposedly implemented by the Emanuel administration last year, unwarranted police shootings and beatings continue daily in Black and Latinx communities.  “There have yet to be any structural systemic changes,” Aislinn Pulley, a Black Lives Matter organizer, told reporters. “We have no reason to believe they’ll be willing to change now.” (Yahoo News, Jan. 13)

The root cause of police abuse is not lack of training or proper standards.  As Monica Trinidad, a People’s Response Team spokesperson who addressed the United Nations Committee Against Torture in 2014 about Chicago police violence, explained, “Policing is historically, inherently, a racist institution.” (Yahoo News, Jan. 13)

On that basis, the Chicago Alliance against Racist and Political Repression and other community groups are supporting an ordinance that would establish an elected Civilian Police Accountability Council with substantial oversight powers.  Demanding community control of police functions recognizes that racism and violence are too deeply embedded in the CPD to be uprooted by piecemeal reforms.

Abolition of the police as a state institution is the only “reform” that can produce meaningful relief.  History shows that communities are fully capable of policing themselves.  Almost 150 years ago, Karl Marx described how the workers and poor of Paris abolished the existing police when they took control of the city for two months and established the Paris Commune.  For the first time in memory, he wrote in “The Civil War in France,” “the streets of Paris were safe [and] without police of any kind.”

The streets of Chicago and other urban centers will likewise become safe when the workers and oppressed rise up to take control of their cities.  Although the media repeatedly blame urban violence on Black and Latinx youth gangs, residents know that the biggest and bloodiest gang on the streets is uniformed in blue.  Socialism will take that blue gang off the streets and eliminate the poverty, racism and lack of good-paying jobs that foster crime.