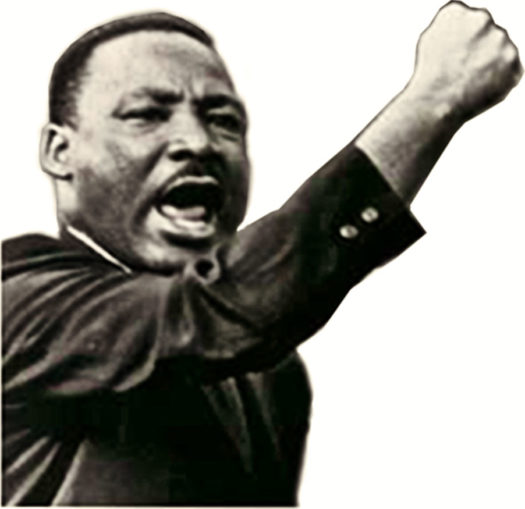 King, along with Dr. Benjamin Spock, pediatrician and co-chairperson of the National Committee for a Sane Nuclear Policy, had just led a mass demonstration on March 25 in Chicago. The protest called for then-President Lyndon B. Johnson to enact an immediate ceasefire and withdrawal from Southeast Asia.

Marching with King at the front of the demonstration were Al Raby, of the Chicago Coordinating Committee of Community Organizations; Jack Spiegel, of the United Shoe Workers Union; and Bernard Lee, King’s assistant in the local chapter of the Southern Christian Leadership Conference. Members of Veterans for Peace in Vietnam also walked alongside the others at the head of the march of thousands of people.

This was the first demonstration that King participated in to protest the war. However, King had expressed his evolving public position in an article published by the Chicago Defender in January 1967. The following month, he delivered an address at an antiwar conference held in Southern California, sponsored by the Nation magazine..

Although SCLC leader King had expressed reservations about the escalating war in Vietnam since early 1965, and even stated his opposition to it, he had refrained from participating in antiwar demonstrations, and had not addressed the military intervention in a comprehensive way. After speaking at Howard University on March 2, 1965, King told the press that the war in Vietnam was accomplishing nothing and negotiations were necessary..

Then at the SCLC national conference in August 1965, King called for a halt to U.S. bombing of North Vietnam and for empowering of the United Nations to negotiate the cessation of hostilities. In his speech, he said, “What is required is a small ﬁrst step that may establish a new spirit of mutual conﬁdence … a step capable of breaking the cycle of mistrust, violence and war.” (King Encyclopedia at Stanford University)

Coretta Scott King, his spouse, was ahead of him on issues related to world peace. She traveled to the Eighteen ­Nation Committee on Disarmament ­conference held in 1962 in ­Geneva as a Women Strike for Peace delegate. Three years later, she addressed two antiwar demonstrations, one on the Mall in Washington, D.C., and the other at New York City’s Madison Square Garden.

Before the SCLC came out publicly in opposition to the Vietnam War, the Student Nonviolent Coordinating Committee issued a comprehensive statement in January 1966. It correlated the Johnson administration’s failure to guarantee the democratic rights of African Americans with the massive deployment of U.S. troops in Vietnam.

By 1967, demonstrations and rallies against the Vietnam War grew in numbers and militancy. On April 15 of that year, 100,000 people marched in New York from Central Park to the United Nations demanding an end to the war. Drs. King and Spock, along with then-SNCC Chairperson Stokely Carmichael (Kwame Ture), led the demonstration. A protest at the Pentagon was held six months later on Oct. 21, at which there were clashes with police.

The growth of the antiwar movement coincided with urban rebellions throughout the U.S. and unrest in the educational sector. Students and youth began calling for the removal of Reserve Officers Training Corps programs from high schools and college campuses and the defunding of military research.

After the passage of the Civil Rights Act of 1964 and the Voting Rights Act of 1965, the struggle of African-American people shifted to the implementation of these legislative measures in the U.S. South, North and West. Independent political parties and mass initiatives were established, such as the Lowndes County Freedom Organization, the original Black Panther Party, in an effort to build substantive political power.

State and federal government resistance to independent political action after 1965 sparked urban rebellions in many cities, including New York, Cleveland, Detroit, Chicago and Los Angeles. The emergence of urban rebellions as a tactic of the struggle for ­national ­liberation and equality alarmed the Johnson administration because it posed a direct challenge to its pro-war foreign policy.

With African Americans serving in Vietnam in disproportionate numbers to their population, a successful antiwar movement calling for a rejection of the draft and the desertion of troops from the frontlines would mean a defeat for the U.S. and ensure a victory for the people of Southeast Asia.

King said at the Chicago rally on March 25, 1967, “Poverty, urban problems and social progress generally are ignored when the guns of war become a national obsession. When it is not our security that is at stake, but questionable and vague commitments to reactionary regimes, values disintegrate into foolish and adolescent slogans. … America is a great nation, … [b]ut honesty impels me to admit that our power has often made us arrogant.

“We feel that our money can do anything,” continued King. “We arrogantly feel that we have some divine, messianic mission to police the whole world. We are arrogant in not allowing young nations to go through the same growing pains, turbulence and revolution that characterize our history. … We arm Negro soldiers to kill on foreign battlefields but offer little protection for their relatives from beatings and killings in our own South.” ­(tinyurl.com/mggp36a)

By late 1967, Dr. King announced that SCLC, in alliance with other organizations from Chicano, Native and poor white communities, would launch a Poor People’s Campaign in Washington, D.C. Thousands would be mobilized to occupy the country’s capital until legislative and administrative actions were taken to end poverty and economic inequality.

Before the Poor People’s Campaign began in May 1968, King went to Memphis to support the strike of 1,300 African-American sanitation workers who were demanding union recognition with the American Federation of State, County and Municipal Employees. In March, King called for a general strike in Memphis if the workers didn’t get union recognition.

King was assassinated on April 4, 1968, before the strike was settled. In response to his murder, rebellions erupted in 125 cities, including Washington, D.C., Baltimore, Pittsburgh and Chicago.

Since 1968, the problems of national oppression and economic inequality have worsened. Unemployment and poverty remain major obstacles to the full realization of national liberation for African-American and other oppressed communities.

These problems cannot be resolved under capitalism. The greater concentration of wealth among the ruling class mandates a redistribution of resources from the small elite of exploiters to the majority of the working class and oppressed.

This social transformation of U.S. society will not come about through the ruling class’s goodwill. The workers, farmers and oppressed must be mobilized outside the framework of the corporate political system, where both major parties are pillars of capitalism.

These are the challenges which face today’s youth. Consequently, a revolutionary party must be built that can speak and act in the interests of the exploited and oppressed in the U.S — and in solidarity with the peoples of the world.