On Jan. 1 two protesters courageously hung a “No DAPL” banner high in the rafters of the U.S. Bank indoor stadium during a Minnesota Vikings/Chicago Bears National Football League game in Minneapolis.

The banner demanded that U.S. Bank, a major investor in the pipeline, divest from the project. The banner drop was captured by spectators on social media. The climbers, Karl Mayo, 32, and Sen Holiday, 26, were arrested for their heroic act. 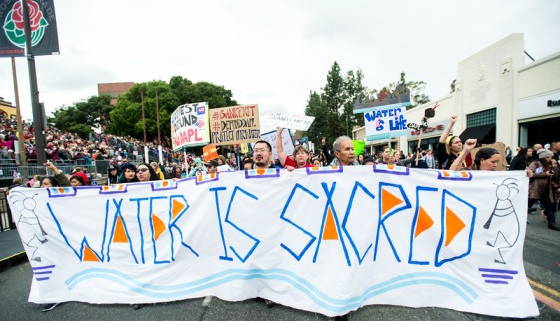 Then, on Jan. 2, activists joined the Rose Bowl Parade to express support for the anti-DAPL struggle. The annual parade in Pasadena, Calif., which precedes the Rose Bowl college football game, attracts hundreds of thousands of people and millions more on television. The activists’ visibility included a float, a 150-foot-long replica of the pipeline, banners and placards. The slogans read “Water is sacred,” “We are the water protectors” and “Water is life.”

The DAPL has been a major focus of national and international protest since last spring, led by hundreds of Indigenous Nations. The oil pipeline, being built with the backing of Wall Street money estimated to be close to $3 billion, is to go underground and under the Missouri River near the Standing Rock reservation, violating sacred ancestral lands of the Lakota Sioux Nation and threatening the river. If the pipeline were to suffer an oil leak, which has happened elsewhere, the water supply of at least 17 million people would be poisoned.