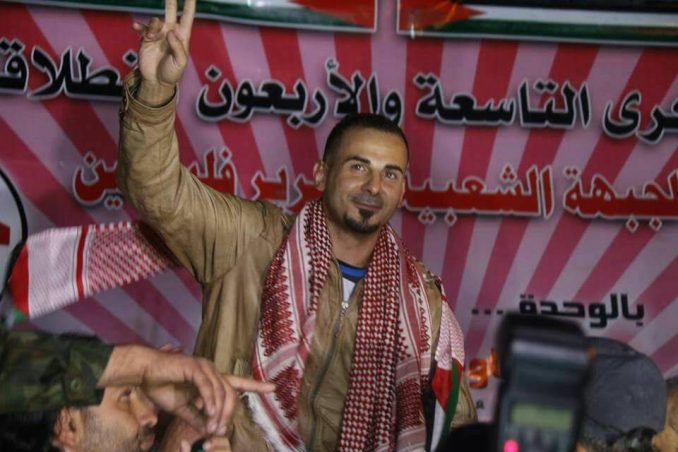 Bilal Kayed in Asira ash-Shamaliya upon his release from prison, Dec. 12.

Over 1,000 Palestinians gathered Dec. 12 in the town of Asira ash-Shamaliya, near Nablus in the occupied West Bank, to welcome Bilal Kayed and celebrate his hard-fought release from an Israeli prison after 15 years.

Kayed, a leader in the prison branch of the Popular Front for the Liberation of Palestine, had been imprisoned by Israel since 2001 on charges of membership in the PFLP’s Abu Ali Mustafa Brigades and armed struggle during the first Intifada.

A PFLP statement marking Kayed’s freedom said, “His victory is one for the entire Palestinian people and the prisoners’ movement that will only strengthen the prisoners’ spirit of confrontation against the jailer and its tools of repression.” (pflp.ps)

Kayed’s 14-and-a-half year sentence expired June 13, but the morning of his expected release, he instead was ordered into “administrative detention” — indefinite internment without charge or trial — by secret decree of an Israeli commander.

The next day, Kayed launched a hunger strike to demand his freedom.

His fast, lasting 71 days, mobilized both Palestinian and solidarity activists, ultimately forcing Israel to agree to a deal securing his release.

Kayed and his supporters feared that by ordering him into “administrative detention,” Israel sought to establish a new precedent for interning Palestinian political prisoners beyond the fixed sentences issued by Israeli military courts.

The unabashedly political nature of his case energized Kayed’s defenders and spurred an unprecedented global campaign for his release.

In Palestine, the PFLP mobilized inside and outside Israel’s prisons, with hundreds of prisoners from different factions joining Kayed’s hunger strike, as thousands of supporters filled public squares across the occupied country.

Internationally, Samidoun: Palestinian Prisoner Solidarity Network coordinated repeated days and weeks of action, with over a hundred demonstrations and educational events across the world.

In New York, Samidoun organized nine rallies for Kayed, while joining protests by Students for Justice in Palestine groups outside the Israeli Consulate and the Democratic National Convention in Philadelphia. It also participated in educational events, including a packed gathering in the Malcolm X and Dr. Betty Shabazz Center, and a report by New York City Students for Justice in Palestine members at the Solidarity Center only hours before Kayed ended his strike.

Other events, including in Algeria, Austria, Brazil, Chile, the Czech Republic, France, Ireland, Italy, Morocco, Portugal, South Africa, Spain, Tunisia and the United Kingdom, made the mobilization one of the largest in support of the Palestinian prisoners’ movement.

Political prisoners showed their solidarity, from a three-day fast by Lebanese revolutionary Georges Abdallah and six other Arab and Basque prisoners in France, to a statement of support by Black activists, including Mumia Abu-Jamal and Sundiata Acoli.

The effort to free Kayed spurred fresh gains for the Boycott, Divestment and Sanctions (BDS) movement. The British-Danish security conglomerate G4S, a contractor with Israeli prisons, has been targeted by many protests in support of Kayed. On December 2, G4S finalized a deal to sell its main Israeli unit. This was a victory for Kayed and the Palestinian prisoners’ movement, whose hunger strikes and prison struggles inspired campaigns against G4S across the world.

In a letter to supporters, released by Samidoun on Aug. 1, Kayed wrote: “What I have received from you through your struggles, your sit-ins, your demonstrations, gives me more determination to continue forward until victory. Either freedom or martyrdom.” (samidoun.net)

On the day of Kayed’s release, his brother Mahmoud Kayed told Al-Jazeera: “We cannot express how happy we are that he has been released, but it is an incomplete happiness because he carries the message of all the other prisoners who remain in Israeli jails.”

Samidoun and other supporters of Palestinian political prisoners will continue weekly protests in 2017, in Manhattan on most Fridays between 5:30 p.m. and 6:30 p.m. Currently these are located outside Best Buy in Union Square, a store selling products manufactured by Hewlett Packard, a contractor with the Israeli prison system and major target of the BDS movement.