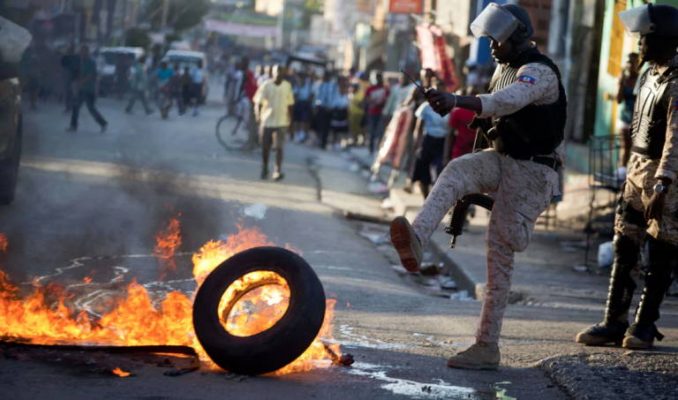 Beginning shortly after the Nov. 20 Haitian election and continuing almost daily since, over 30 massive, militant demonstrations have filled the streets of Port-au-Prince, the country’s capital, condemning the latest “electoral coup d’état” and demanding fair and free elections.

The cops have been growing increasingly aggressive as the protests have continued. Wendy Lerisse, a Haitian videographer, has posted YouTube clips of many of the protests. One of the Christmas Eve demonstrations included footage showing cops using a water cannon against a group of demonstrators. As a protester falls down, the cops continue to spray her.

As the protests have continued, there appears to be some resistance in the Provisional Electoral Council to certifying Jovenel Moïse, the candidate of the Haitian Tèt Kale Party (PHTK), as president. The official announcement has been postponed from Dec. 28 to Jan. 3.

Michel Martelly, the founder and leader of the PHTK, was president of Haiti from May 2011 until Feb. 2016. Martelly was imposed as president by then U.S. Secretary of State Hillary Clinton, and he ably assisted Washington in maintaining its hold on Haiti during his presidency.

The first attempt to continue the PHTK’s hold on power, the elections of Aug. 9, 2015, failed. The fraud was so massive and blatant that a majority of Haitians rejected the election’s legitimacy.