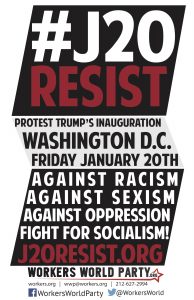 call for mass, militant protests on Inauguration Day is getting a favorable response from all sectors of the working class. This includes organized labor — notwithstanding the conciliatory, “Give Trump a chance” tone set by AFL-CIO President Rich Trumka and other major union heads right after the presidential election results came out.

The Oregon AFL-CIO and Alameda Labor Council have passed strong resolutions calling their members out on Jan. 20. The Oregon resolution called for “a united front of all those threatened by the Trump presidency.” The ALC “endorses and encourages all members to participate in the nationwide call for protest and actions and a reassertion of the power of organized labor on Friday, Jan. 20, the day of the Inauguration of President Donald Trump.”

A joint resolution passed by Community and Labor United for Postal Jobs and Services and Communities and Postal Workers United pointed out that “a Trump presidency threatens the deportation of millions of undocumented workers; the exclusion, surveillance, profiling and incarceration of our Muslim sisters and brothers; major restrictions on women’s reproductive rights; the return of anti-LGBTQ laws; and increased harassment, brutalizing and incarceration of Black and Brown people by local police departments. It threatens to support environmentally dangerous projects like the Dakota pipeline, and repression of the Indigenous Nations who are fighting it.”

United Steelworkers Local 8751, the Boston School Bus Drivers Union, voted to send a bus of its members to the counterinaugural in D.C. They are not alone. J20 is all the buzz among AFSCME members in Maryland, United Electrical-represented grocery workers in Vermont, Longshore Workers in California, Communications Workers in New York City and public sector workers in North Carolina.

There will definitely be a strong and very visible labor contingent in D.C.

Don’t give racist Trump a chance!

Some unions, including the United Auto Workers, estimate that a third of their members actually voted for the union-hating bigot who captured the U.S. presidency. That figure was cited by UAW International President Dennis Williams to justify his plans to have a friendly meeting with President-elect Trump. After Williams publicized his intentions — almost immediately after the election results were announced — AFL-CIO President Rich Trumka and other union heads sent Trump letters of congratulations.

These placaters, however, did not score any brownie points for their members with the future president — quite the contrary. Trump has bared his fangs toward organized labor. His nominee for Secretary of Labor Andrew Puzder is CEO of CKE Holdings, the parent firm of Hardee’s and Carl’s Jr. fast food chains. Puzder opposes raising the minimum wage, and CKE has been successfully sued for cheating workers in violation of federal wage and hour regulations. Puzder would be in charge of enforcing those regulations.

On the use of automation to reduce workers, Puzder stated that robots are “always polite, they always upsell, they never take a vacation, they never show up late, there’s never a slip-and-fall or an age, sex or race discrimination case.” (New York Times, Dec. 8)

This outrageous nomination came right after Steelworkers Local 1999 President Chuck Jones, who represents Carrier workers in Indianapolis, Ind., tore apart Trump’s phony showmanship as the “savior” of 1,100 jobs slated to go to Mexico. “He lied his ass off,” said Jones. The actual number of jobs retained was between 700 and 800; almost 600 workers at Jones’ plant will still be getting a pink slip.

Unwilling to take criticism, Trump immediately slandered Jones on Twitter as being responsible for Carrier’s threat to move. This incited Trump’s fascist supporters to send death threats to Jones and his children. This anti-union attack not only threatens Jones but Local 1999’s majority Black executive board.

The labor movement, as it mobilizes to rally against Trump on Jan. 20, must throw its muscle behind this courageous local.

All of the working class must unite. Organized labor must see itself as part of the broader working-class movement. Low-wage workers, including those in precarious work, are a part. Unemployed and underemployed workers are a part. Prisoners are a part. Workers around the globe — super-exploited, often by the same bosses we work for — are a part. Migrant workers, risking their lives to escape war or austerity, are a part. All of us, together, are unstoppable.

Build a united working-class front! All out for Jan. 20!

Grevatt has been an autoworker and United Auto Worker activist at Chrysler for 29 years.