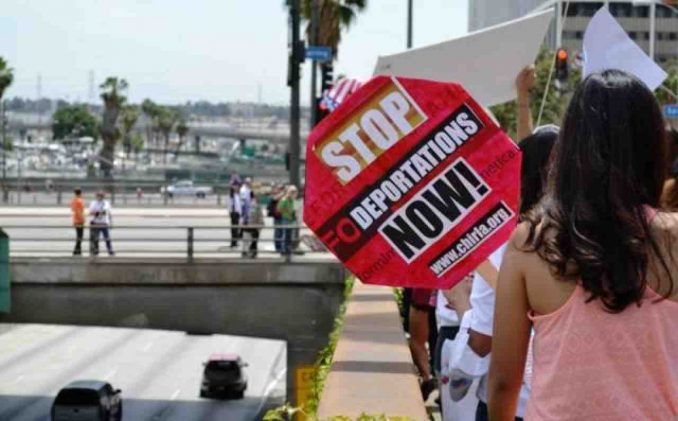 The American Federation of Teachers will “do everything in our power to stop any kind of action against our immigrant families, our Muslim families, our Latino families and especially our undocumented students,” said AFT President Randi Weingarten during a Nov. 22 telephone town hall. In advance of rabidly racist and Islamophobic President-elect Donald Trump’s inauguration on Jan. 20, the union has pledged concrete support to both the administration’s potential targets as well as those mounting the fightback.

AFT plans to support organizers seeking to establish or maintain sanctuary cities, schools and campuses, where Immigration and Customs Enforcement cops would be denied entry without a warrant. Teachers and faculty will be equipped with “Know Your Rights” training so they’re prepared to deal with raids and deportations. Lesson plans will promote diversity and acceptance to counteract Trump’s hate mongering. Also, the union will lobby against repealing laws protecting the children of undocumented workers. The National Immigration Law Center and University of California-Davis School of Law’s Legal Services Center are offering practical advice to students and families at risk. (aft.org, Nov. 28)

Growing unity between organized labor and anti-racist organizers, as exemplified by the AFT, is bound to strengthen both movements.

A Dec. 8 Common Dreams article quoted California fast food worker Rogelio Hernandez, representing Fight for $15: “Putting one of the worst fast-food CEOs in charge of national labor policy sends a signal that the Trump years are going to be about low pay, wage theft, sexual harassment and racial discrimination. … Fight for $15 won’t back down for one minute in our demands for $15 an hour and union rights for all workers.”

In the same article Service Employees Union President Mary Kay Henry said workers aren’t fooled by Trump’s move. ”They know it threatens their ability to have a voice and to provide for their families. … SEIU members … will stay in the streets to fight back against anti-worker extremism and we will not stop until all work is valued and every community has the opportunity to thrive.”

Chris Shelton, president of the Communication Workers, issued a statement: “My union and the entire labor movement are more committed than ever to fight employer wage theft, make sure workers can be safe on their jobs, stand up against poverty-level wages and challenge employer abuse. We will be the advocates that working people need because, sadly, it’s clear that help won’t be coming from the Department of Labor.” (cwa-union.org, Dec. 8)

The Washington, D.C., City Council not only moved the Universal Paid Leave bill forward on Dec. 6, but restored medical leave to the program. The proposal now includes eight weeks of parental leave, six weeks of family leave and two weeks of medical leave, making it one of the nation’s most generous packages of such benefits. “Today’s vote [11-2 by the “committee of the whole”] demonstrates the power of families who united across the District around the shared need for vital benefits,” said Ward 7 resident Dyana Forester, of Food and Commercial Workers Local 400, which represents grocery and retail workers. The final vote is scheduled for Dec. 20. Mayor Muriel Bowser has still not indicated if she will ultimately support the bill. “We are not done yet,” said Jaime Contreras of SEIU 32BJ. “Workers are counting on the Council and Mayor to keep their commitment to low-wage workers and communities of color during the final vote so it can become law.” (dclabor.org, Dec. 6)