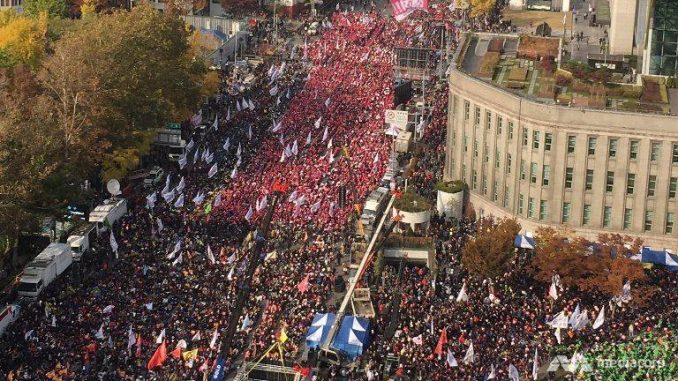 Dec. 5 — The downfall of the regime in south Korea seems imminent.

For the sixth Saturday in a row, huge crowds gathered on Dec. 3 in many cities and towns to demand the president’s impeachment for a corruption scandal. The People’s Emergency Action for Bringing Down the Park Geun-hye Regime estimated that 2.12 million people were involved in candlelight rallies across south Korea, including 1.7 million in Seoul and tens of thousands in Pusan, Taegu, Kwangju and other cities.

Daily protests are planned for the week beginning Monday, Dec. 5, building up to a vote on impeachment to be held that Friday in the National Assembly.

The Korea Times reported on Dec. 5: “The Korean Confederation of Trade Unions (KCTU), one of the nation’s two umbrella unions, is organizing rallies at several spots on Yeouido where the public can participate.

“One is in front of the National Assembly, where an investigation into the scandal is underway. The KCTU said it will continue the rally until the vote is held.

“The umbrella union will also hold a gathering in front of the Federation of Korean Industries today, demanding that it disband for encouraging member companies to raise funds for two foundations set up by Park’s disgraced confidante Choi Soon-sil.”

Corruption and the military

President Park is the daughter of Park Chung-hee, a general who took power in 1961 through a military coup and ruled south Korea with an iron hand until his assassination in 1979. The Park dictatorship was approved by the U.S. government, especially after Park sent 320,000 troops to supplement U.S. forces in the Vietnam War.

Since World War II, the Pentagon has maintained a large military presence in south Korea, which was greatly expanded after socialist revolutions in both the north of Korea and China and especially during the 1950-53 Korean War.

The current president’s troubles are linked to a scandal involving funds donated to two foundations controlled by her close associate, Choi Soon-sil.

Samsung and Hyundai are embroiled in the scandal for allegedly having donated to the foundations after being pardoned by the president for economic crimes. According to the Dec. 5 Wall Street Journal, “Park has pardoned top executives convicted of crimes, for example, Chung Mong-koo, chair of Hyundai Motor Group, sentenced to three years for embezzlement, pardoned without serving any time. One of the foundations allegedly controlled by Choi was funded by 15 of South Korea’s largest conglomerates.

“The chairmen of Samsung, SK, Hanwha, Hyundai Motor and CJ groups have all been pardoned in the past decade.”

The implications are clear: The president and her friend have enriched themselves by favoring the most powerful corporations in the country.

Adding to popular fury at the Park kleptocracy was south Korea’s worst maritime disaster, the sinking of the Sewol ferry on April 16, 2014. It was caused by vast overcrowding due to building an additional deck on top that allowed the vessel to easily capsize. The sinking resulted in the deaths of 304 people, mostly students. Park did not show her face in public until seven hours after the disaster.

The U.S. government is acting low-key about the current turmoil in south Korea, but there can be no question that it is working feverishly behind the scenes trying to shore up both the military and the ruling class to prevent the popular masses there from making any real gains.