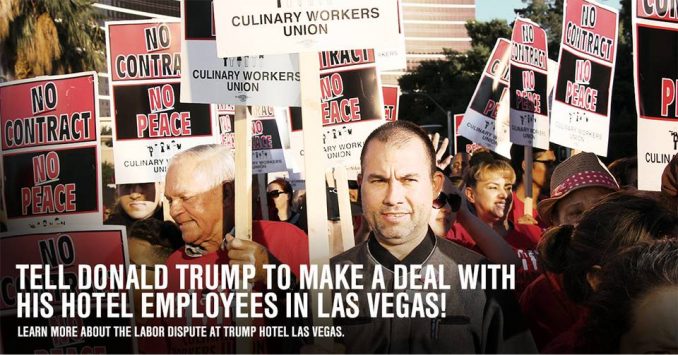 During the final week before the election — but not reported by the corporate press — the National Labor Relations Board on Nov. 3 ordered Trump International Hotel Las Vegas to bargain with Culinary Workers Local 226. The union was elected in late 2015 to represent about 500 mostly Latinx housekeepers, food and beverage staff, and guest service workers. Ever since March 29, the hotel has contested the election and refused to recognize the UNITE HERE affiliate. Along with a series of rallies and marches demanding recognition, the union filed an unfair labor practices case against Trump management in May. In September it called a nationwide boycott of all Trump properties, with AFL-CIO support, to bolster its right to collective bargaining. (In These Times, Nov. 7) Will Trump respect the workers’ rights? Stay tuned.

McDonald’s agreed on Oct. 30 to pay out $3.75 million in back pay, damages and legal fees to settle a lawsuit brought by 800 workers in five California restaurants. Filed in 2014, the class action suit accused both the Smith Family LP, owner of the five franchises, and the Illinois-based McDonald’s corporation of withholding overtime pay and failure to keep accurate pay records and compensate workers for time spent cleaning uniforms. Although McDonald’s has not officially admitted liability for widespread wage theft, the proposed settlement marks the first time the McDonald’s corporation agreed to settle legal claims from one of its franchises.

An unrelated, currently pending case before the National Labor Relations Board will determine whether McDonald’s is a joint employer alongside franchisees. If so, McDonald’s could be found liable for labor violations at all franchises, including a pending sexual harassment complaint filed by 15 workers in California. If ruled a joint employer, the McDonald’s corporation would be required to bargain with any unions formed by McDonald’s workers. (cnbc.com, Oct. 30)

Despite round-the-clock picket lines, Momentive, whose third-quarter earnings showed a 61 percent increase over last year’s earnings (from $44 million to $61 million), has kept both plants running with expensive scab labor — exposing its aim to bust the union. On Nov. 7, five days into the strike, the workers resoundingly rejected Momentive’s latest contract offer. According to worker Joe Duncan, “This contract was worth less than the one we already voted down. This is not fair bargaining.” (timesunion.com, Nov. 7)

A Nov. 11 update posted on the union website reads: “The Company is now going to an all-time low: they are sending Private Investigators to homes of our members asking questions about issues in the Plant.” Union members are advised not to talk to investigators and to report such visits to the union. Meanwhile, the Capital District Area AFL-CIO called on all unionists to show solidarity on the Nov. 12 picket line.

What do Michael Kors, Target and the U.S. Department of Defense have in common? They outsource their U.S. port trucking and warehousing to California Cartage and to Intermodal Bridge Transport — West Coast companies that violate U.S. labor laws and Kors, Target and DOD codes of conduct. Both Cal Cartage and IBT misclassify drivers as “independent contractors” to shift expenses onto drivers’ backs and to keep them from unionizing (and avoid paying Social Security, workers’ comp and disability). These workers, many Latinx immigrants, have filed multiple lawsuits and claims demanding an end to wage theft, a safe workplace and the right to form a union free from retaliation. To support the workers’ demands, sign the petition at tinyurl.com/jfaa3w2/.