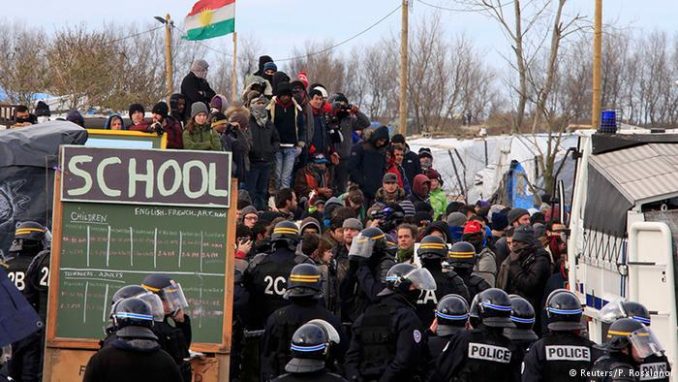 Although many jobs have dried up and developed capitalist countries throughout the world no longer seek as much low-wage labor, people from poor countries wracked by misery and war are taking almost unimaginable risks to make their way to developed countries where they hope for a better future.

Often, it is to the very imperialist countries whose ruling classes have for generations fattened off exploiting the labor and resources of their homelands.

According to the U.N. High Commissioner on Refugees, even though the flow of people making Mediterranean Sea crossings from Africa to Europe in 2016 has been only about a third of last year, the death rate this year is higher. For the Central Mediterranean route between Libya and Italy, one person has died for each 47 who made it through.

Even after refugees reach Europe safely, their reception is not at all assured. In countries like Hungary, which has had a reactionary government since capitalism was restored in 1989, it is downright hostile.

France, which once exploited much of Africa as its colonial possession, has a large immigrant population and sports the motto “Liberty, equality and fraternity.” But its reception for refugees is mixed.

One of the biggest unofficial camps for refugees in Europe grew up over the past few years near Calais in northern France. Migrants there have been mainly from East Africa — Sudan, Somalia, Eritrea and Ethiopia — or Afghanistan, not former French colonies. They gathered in a camp nicknamed “The Jungle” that was close to the tunnel running between France and Britain. The goal of many has been to get to Britain, where some have family ties and the hope of finding jobs. Some 3 million immigrants work in Britain.

Various unofficial estimates from charity organizations put the number of refugees who had been living in the Calais camp at between 6,000 and 8,000. One-third were women, and between 1,000 and 2,000 were unaccompanied minors, some as young as 10.

Much political maneuvering is taking place in France around the presidential election scheduled for this coming Spring. The semi-fascist National Front, a major political party in France, has been whipping up an anti-immigrant, racist frenzy over the camp. The government of François Holland, which calls itself “Socialist” but serves the interests of the capitalist class, decided to raze the camp and send the people living there to “reception centers” throughout France which were specially built to accommodate immigrants.

The Calais camp was completely razed by the end of October, and over 6,000 people were moved by bus to the centers. However, some 1,200 unaccompanied minors, many of whom have family ties to refugees in Britain, were not moved, and a number of them wound up sleeping in the open air for several nights.

The British government has accepted a few hundred. Britain and France are arguing over others, who now have accommodations in temporary centers. (Agence France Presse, Nov. 4)

A number of refugees didn’t get on the buses from Calais but instead headed to Paris. Some went to a very large encampment in northeast Paris, near the Stalingrad Metro station. The mayor of Paris, Anne Hidalgo, estimated it was growing at the rate of 80 to 100 people a day, though not all are coming from Calais.

On Nov. 4, for the thirtieth time, the cops dispersed this encampment and sent around 3,500 people to reception centers. (La Croix, Nov. 4)

Telesur reported on Oct. 10 that young people from Paris’ immigrant suburbs had started a program of providing refugees sleeping on the streets with free meals. Soon after the article was posted, the project went viral online.

“We also are children of immigrants, we grew up in poverty; the principle of sharing is part of who we are,” said Souleymane, a resident of the Sarcelles suburb where the project began.