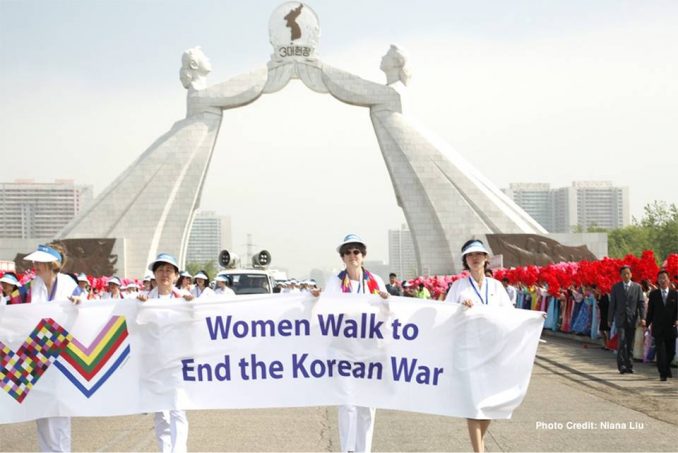 “No first use” of nuclear weapons. It is a pledge never to attack another country with nuclear bombs or missiles, unless that country has attacked you first with such weapons.

The world would be a much safer place if the U.S. and the other countries in NATO that possess nuclear weapons were to make such a pledge. But these imperialist states refuse to do so.

In fact, only three of the world’s nuclear powers have pledged “no first use.” They are China, India and the Democratic People’s Republic of Korea.

But you wouldn’t know it if all you read and heard came from the politicians and major media in the U.S. They are drumming it into the heads of the people here that north Korea — the DPRK — is a major threat to the world because it has now built half a dozen nuclear warheads.

The U.S. has almost 7,000 such doomsday weapons. It has many military bases in south Korea. Several times a year it conducts huge war exercises directed against the DPRK.

The last was held in August and involved 80,000 troops from the U.S. and south Korea. Other U.S. war “games” directed at north Korea have included troops from Japan — the hated colonial ruler over Korea from 1910 to 1945.

Now another nuclear power has announced it is joining these U.S. war exercises: Britain. It has nuclear missile-carrying submarines that can prowl the seven seas.

Also ratcheting up the threat of another war in Korea are economic sanctions on the DPRK that Washington has demanded from the U.N. Security Council. The sanctions are supposedly in retaliation for the DPRK’s defensive nuclear program. But in truth there is no moral or political argument to justify these sanctions.

The U.S. not only possesses a vast arsenal of such weapons, but it is also the only country to have actually used them, killing hundreds of thousands of Japanese civilians at the end of World War II. Yet the U.S. and its allies have never been punished for developing such weapons.

The DPRK would never have had to allocate great resources to building nuclear weapons and maintaining strong defense forces had U.S. imperialism not been trying to crush this socialist country since its founding in 1948. Yet not even a major invasion by U.S. forces in 1950, also under cover of a U.N. resolution, followed by three years of vicious war that killed 4 million people, could defeat the Korean people’s resistance.

Ever since that war, the DPRK has been calling for the U.S. to join it in a peace treaty because, even 63 years after the fighting ended, the two countries are still formally in a state of war.

An international group of women once again walked along the demilitarized border between north and south Korea on May 28 to dramatize their call for a peace treaty to end the Korean War.

The DPRK’s position on nuclear weapons was made very clear on Oct. 6 by DPRK Ambassador Ri Tong Il, speaking to the U.N. General Assembly:

“It is the common aspiration and common desire of [humanity] to live in the world peaceful and secure, free of nuclear weapons. In building the peaceful world, disarmament, in particular nuclear disarmament, is of the greatest importance.

“In this context, the DPRK fully supports the global struggle for total elimination of nuclear weapons.

“As far as the nuclear disarmament is concerned, whether it is achieved or not largely depends on the political determination and political will of the big powers that possess larger stockpiles of nuclear weapons.

“The United States, the world’s largest nuclear weapon state and the only country that used nuclear weapons, recently announced a new modernization program of all existing nuclear weapons within three decades, earmarking an astronomical figure of one trillion U.S. dollars.

“Nevertheless, the United States is yet frequently talking about the so-called vision of the world free of nuclear weapons, but it is only a hypocrisy intended to deceive the world and it is none other than a screen for covering up their strategy of nuclear monopoly and world hegemony.

“The continuing maneuvers of the U.S. for modernization of nuclear weapons is an act of challenge to the desire of the humanity to live in the world free of nuclear weapons, posing the greatest threat to the very survival of the mankind as well as the world peace and security.”

Stop the threats and sanctions! Sign a peace treaty now!