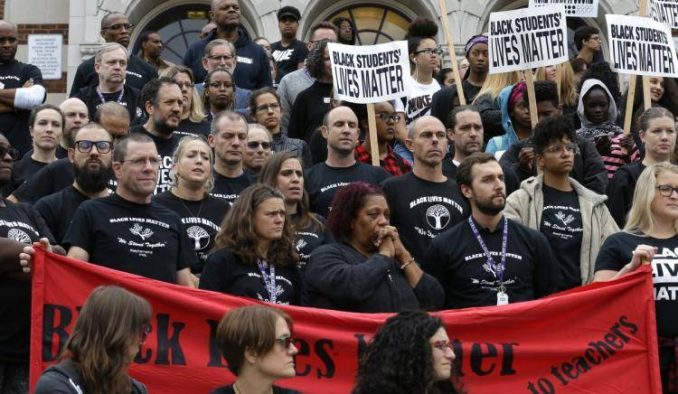 Many hundred Seattle teachers, counselors, instructional assistants, paraprofessionals, custodians, nurses and other educators will wear T-shirts to school on Oct. 19 that read “Black Lives Matter.” On this Seattle Education Association-sponsored day the focus will be on the school-to-prison pipeline and institutional racism in the U.S. Already over 700 educators have ordered shirts!

The idea was initiated at John Muir Elementary school when teachers decided to wear T-shirts on Sept. 16 that read “Black Lives Matter. We Stand Together. John Muir Elementary.” This was to coincide with an event organized by Black Men United to Change the Narrative to celebrate Black students. However, after a white supremacist issued a bomb threat, the event was cancelled. Yet dozens of Black community members came to high-five the students, and the staff wore the shirts anyway!

At a subsequent Seattle Education Association meeting, Social Equality Educators introduced a resolution calling for educators citywide to wear Black Lives Matter T-shirts on Oct. 19. The resolution specifies that the SEA Representative Assembly will address institutional racism by “showing solidarity, promoting anti-racist practices in schools and creating dialogue in our schools and communities.” Solidarity actions are being organized in other cities; participants are asked to post pictures on Facebook at tinyurl.com/husb5gg. (iamaneducator.org, Oct. 11)

A 17-hour negotiating session on Oct. 10 led to an agreement between the Minnesota Nurses Association and five Allina Health hospitals in the St. Paul area. The majority of the members ratified it Oct. 13, returning to work Oct. 16.

After six weeks of an unfair labor practice strike beginning on Labor Day, Sept. 5, plus an earlier one-week strike in late June, the 4,800 nurses won improved procedures for safe staffing and better staffing ratios, as well as workplace safety guarantees. However, they were unable to stop Allina’s ultimatum to replace union-based health care plans with hospital plans, which will raise nurses’ out-of-pocket costs. But they did win a “no diminishment” clause guaranteeing benefits will not be reduced through 2021.

As MNA Executive Director Rose Roach stated, “This contract represents compromise. While it’s nowhere near what nurses deserve, they can hold their heads high. … Nurses are determined to keep speaking up for their patients and their profession as they return to the bedside.” (mnnurses.org, Oct. 13)

Federally mediated talks resumed this month between Honeywell and about 400 aerospace parts workers the company locked out in May. After voting overwhelmingly to reject a contract that would force them to pay more for their health care plans, lowering pay below $15/hour for many workers, United Auto Workers Local 9 in South Bend, Ind., and Local 1508 in Green Island, N.Y., found themselves replaced by scab labor. Increasing its profits 152 percent over the past five years, Honeywell pulled in record profits of $4.8 billion in 2015. (paydayreport.com, May 27)

Voting to unionize is their cup of tea

Two hundred workers who make and package teabags at Lipton’s factory in Suffolk, Va., voted to unionize with the Food and Commercial Workers, UFCW announced Aug. 29. Though management described the workers as “happily nonunion” in 2013, factory equipment upgrades that year resulted in layoffs of a quarter of the workforce. Since then the workers were forced to work 12-hour shifts for 13 days in a row. Despite this grueling schedule, workers missing more than eight workdays a year were automatically fired.

“We decided we deserved more than what we were getting,” said Anita Anderson, a 10-year line worker. In early 2016, several workers contacted the UFCW. According to Philip Surace, a 15-year mechanic, Lipton quickly changed its tune: “Once the word ‘union’ was mentioned, suddenly they started to hire people.” In addition to easing the harsh schedule, Lipton fired the plant manager and the head of human resources. The workers will seek to protect and expand these victories as they enter contract negotiations with Lipton. (labornotes.org, Sept. 27)