Omar Shakir and his family were under siege last July 23 when the Oakland Police Department falsely believed someone in Oakland’s Black community had shot a cop. This was even after the OPD knew full well that Officer Nadia Clark was uninjured and only a single round had been fired at her car. 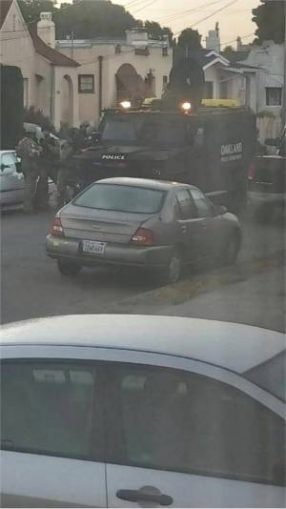 The OPD set up a 10-block-radius lockdown around Shakir’s East Oakland home. It even positioned snipers on neighbors’ roofs.

The OPD went into motion, as they have historically done, without regard for the rights or civil liberties of the Black community, and despite the fact they are still under federal monitoring from a prior case.

The OPD face further charges, including embarrassment, this year when a number of officers were found to be involved in the rape of a minor girl. This crime caused the consecutive departures of Chief Sean Whent and two other hastily named replacements. The OPD currently has no chief.

The young Omar Shakir spoke to Workers World to let the public know what really happened: “There was an accident involving a police officer, Nadia Clark, and a shooting right after the accident. They somehow mixed me up in the incident with the shooting. Around 5:30 a.m. on July 24 me and my family woke up to a flashbang. There was a SWAT team with all these army-looking men with tanks, armored trucks. It was a scary situation. [The warrant was time stamped 7:07 a.m., reported SF Bay View on Aug. 16.]

“I was looking out the window, trying to see what was going on. Then over the loudspeaker they were calling my name. I came outside and walked to the middle of the street and was cuffed by a military-looking guy from the SWAT unit. The military men placed a robot in my home. I said, ‘I’m no terrorist!’

“My brother, nephew and niece came out with no socks and shoes. Two tenants also came out. It was an awkward situation. They transported me downtown to be questioned by the homicide unit.

“I was there for four hours then transferred to North County Jail in Oakland. I was held there till that evening. Then they transported me to Santa Rita in Dublin. I was there until July 29, supposedly based on accusation that I shot a cop. I think they knew it wasn’t me the whole time. They just wanted to mess with me.”

The court set bail at $85,000. The effect on Shakir’s family was “devastating,” he said. “My niece doesn’t like to sleep alone; my nephew, same with him.”

Then the cops “said they had got the guy the day before I was bailed out.” Now they’re charging Shakir with possession of firearms, since they found a gun in his home during the illegal raid. “But the 10-year-old felony had been reduced to misdemeanor due to a program I completed, but it’s not showing in their records,” said Shakir.

It has been “a total embarrassment” for Shakir’s family “that they incriminated me with something I had nothing to do with,” he said. “Most people know I wouldn’t do anything like that.”

Shakir’s next court appearance is Nov. 30 at Rene Davidson Courthouse in Oakland. He hopes for public support, which he says he has gotten from “my family, friends, the Oscar Grant Committee and my lawyer Dan Siegel.”

“I have family to take care of,” said Shakir. “I wouldn’t consider doing anything like that. My niece and nephew shouldn’t have seen anything like that at ages of five and eleven. [Cop] misconduct just needs to stop.”