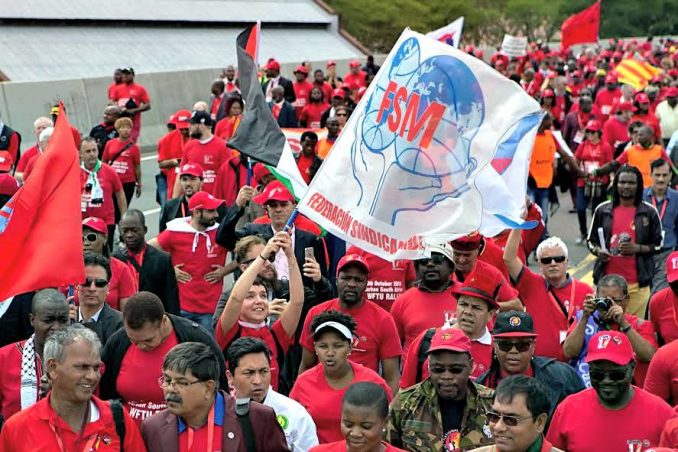 COSATU General Secretary Bheki Ntshalintshali’s statement on the general strike summarized the situation: “The workers’ lives are getting worse as a result of the structural economy that we inherited from the colonial and apartheid past.” Although apartheid was defeated in South Africa, capitalism continues with its crises of unemployment (over 26 percent), inequality and poverty. (cosatu.org.za)

The South African Communist Party, led by Blade Nzimande, endorsed the general strike in a statement published Oct. 7, adding, “SACP further supports COSATU’s call for the acceleration of processes to ensure the implementation of a national minimum wage.”  COSATU, the SACP and the African National Congress form the historic Tripartite Alliance that abolished apartheid and is continuing the fight against capitalism today.

COSATU President Sidumo Dlamini made the call for the Oct. 8 march at the 17th Congress of the World Federation of Trade Unions, begun on Oct. 5 in Durban.

One marcher, comrade Eric “Stalin” Mtshali, explained to this reporter that the site of the WFTU gathering, the Albert Luthuli International Convention Center, was formerly Durban Central Prison. There, he and other participants had been held during apartheid. The walls are now covered in murals and plaques dedicated to the struggle.

COSATU slogans for the general strike, and at the march and rally joined by the WFTU, included implementation of free education, a national minimum wage, fight to defend collective bargaining and demand the total banning of labor brokering. Brokering is a form of outsourcing casual labor, comparable to temp agencies or day labor in the U.S. Education demands address the lack of access to college and vocational training for the country’s young people, who were numerous at this demonstation.

The WFTU, representing 92 million workers in 136 countries, led a feeder march from the Luthuli center to the COSATU march, chanting, “Down, down with capitalism! Up, up with socialism!”

Signs held by workers and students in the march read: “High electricity pricing kills the poor,” “We have a constitutional right to strike,” “Create jobs at a living wage now!” and the classic “An injury to one is an injury to all.” Shoppers and passersby gave thumbs up to the banners and signs.

In addition to the largest-ever WFTU delegation from West African countries, hundreds of union members from places like Venezuela, India, Vietnam, Brazil, Palestine, Cuba, Europe and the U.S. joined chants of “Viva [long live] COSATU! Viva WFTU!” amid a sea of red banners, hats and shirts.

COSATU invited North American WFTU delegates Diann Jeffers and Estela Vazquez, who were carrying a cardboard image of Puerto Rican political prisoner Oscar Lopez Rivera, to join the front banner. Knowing that Lopez has been in prison longer than Nelson Mandela, South Africa’s labor leadership promoted solidarity with the movement to free him.

The march ended at Curries Fountain Stadium, where a monument to the founding of COSATU there in 1985 was unveiled. A rally was co-chaired by COSATU President Dlamini and WFTU’s General Secretary George Mavrikos.

Thanks were given to many unions for solidarity messages. Among these was one from UNITE HERE Local 26, the striking Harvard University Dining Service workers. The statement mentioned the local’s record of support for South African workers and COSATU in the struggle to defeat apartheid.

The issues central to the South African labor movement resonate with working-class people from all over the world, whether in unions or not, employed or unemployed, who admire COSATU and look forward to the growth of anti-racist, social-justice unionism.