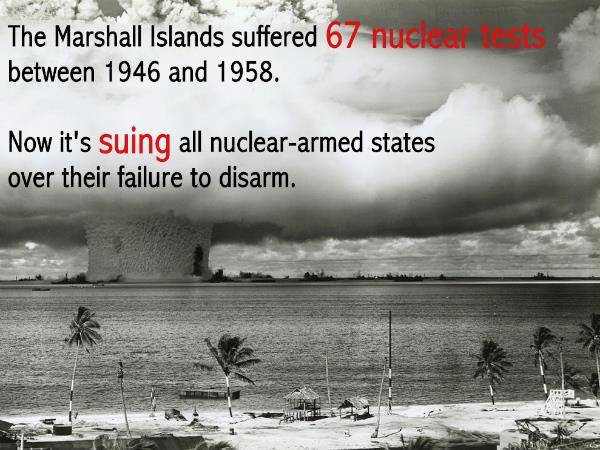 On a Sunday after church in 1946, a Navy commodore met with the people of Bikini Atoll and told them they were like the Israelites, a chosen people, and that perfecting the atomic bomb would deliver humankind from future wars. Within one month of that conversation, Bikinians boarded U.S. ships for relocation. Within five months, the first two tests had been conducted. “We located the one spot on Earth that hadn’t been touched by the war and blew it to hell,” Bob Hope reportedly once said. (washingtonpost.com, Nov. 27)

Bikini Atoll is a string of islands in the territory of the Marshall Islands — a nation in the Pacific Ocean of some 55,000 Polynesian people. The thriving Polynesian culture for hundreds of years spread from Tahiti to Hawaii, spanning many thousands of miles. At the end of World War II, the U.S. took control of the Marshall Islands as a “trust territory” — in other words, a colony. The Pentagon decided that its isolated position made it the ideal location to test nuclear bombs: first atomic bombs and then hydrogen bombs.

Every year, the Indigenous people of the Marshall Islands mark March 2 as “Nuclear Victims Remembrance Day.”

Between 1946 and 1958, the U.S. detonated 67 nuclear bombs in the Marshall Islands, 23 of them on Bikini Atoll. Residents had been moved to neighboring islands that could not sustain increased population, so many starved. The people were told they could return to their islands when the tests were completed, but the radioactive fallout made those islands permanently uninhabitable. Many of the people also suffered from a huge increase in cancer and birth defects.

In 1983, the Marshall Islands finally won its independence. And in 2014, mindful of the terrible consequences of the Pentagon’s nuclear testing on their people, the Marshall Islands government filed suit, first in U.S. federal court and then in the United Nations International Court of Justice, demanding that all countries possessing nuclear weapons, such as the U.S., abide by their obligations under the 1968 Nuclear Nonproliferation Treaty, particularly the treaty’s Article VI.

Article VI commits nuclear weapon states like the U.S. to “pursue negotiations in good faith on effective measures relating to cessation of the nuclear arms race at an early date and to nuclear disarmament, and on a treaty on general and complete disarmament under strict and effective international control.” (armscontrol.org)

Lawyers for the Marshall Islands said the goal of the suit was “to persuade the court to order serious disarmament talks that were long overdue. They also said that many countries favored drafting a convention to ban nuclear arsenals, much like the treaties that prohibit chemical, biological and other weapons of mass destruction.” (nytimes.com, Oct. 6)

By a vote of 9 to 7, the International Court of Justice, the U.N. court in The Hague, ruled on Oct. 6 that it did not have jurisdiction to hear the case. “It’s difficult to understand that it finds no jurisdiction even when the parties have ‘opposite views,’” said lawyer Phon van den Biesen, citing a definition that the court uses for cases it hears.

In fact, the U.S government had already signaled it would ignore any court decision that might impede its military buildup. At the same time that it is trying to bully the Democratic People’s Republic of Korea out of testing nuclear weapons to defend itself from a threatened U.S. attack, the Pentagon has announced a $1 trillion program to “modernize” its vast arsenal, which currently contains 7,100 nuclear bombs. (armscontrol.org,Aug. 1)