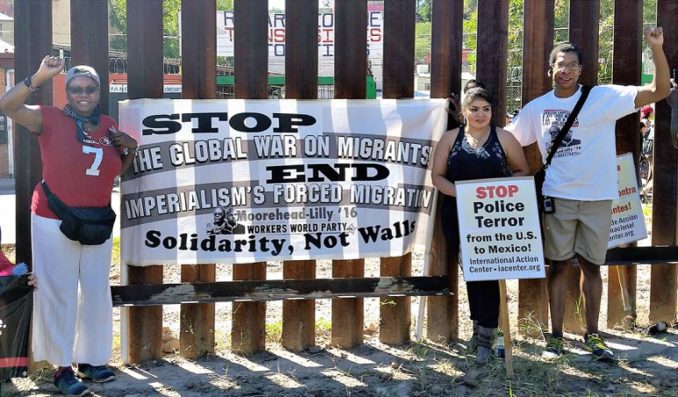 A U.S./Mexico Border Convergence took place Oct. 7-10 at Nogales, a city in both Arizona and the Mexican state of Sonora. Organized by the School of Americas Watch, the convergence promoted solidarity with migrants, who face many forms of violent repression when poverty and other conditions in their home countries force them to cross the border into the U.S.

Much of this repression comes from the racist U.S. Customs and Border Protection agency, which has been given the green light by the federal Immigration and Customs Enforcement agency to beat, imprison and kill migrants who attempt to cross the border into the U.S.

A statement from the organizers of the convergence read: “Over the past 26 years, SOA Watch has grown from a handful of people into one of the most dynamic multi-generational, cross-continental movements against militarization in the Americas. Thousands have been educated and mobilized to take a stand against U.S. policies and to engage in nonviolent direct action. New layers of activists are joining the movement.

“The militarization of the border means the expansion of U.S. military strategies across the Americas. To speak of the border means naming the root causes of migration, as well as policies that criminalize and exploit communities of color inside and outside the United States. Today, we say enough!”

For many years, the SOA Watch protests took place in Fort Benning, Ga., attracting thousands of activists to oppose the U.S. military training there of Latin American troops from various countries to disrupt and destroy popular movements for liberation.

On Oct. 7, a vigil took place in front of the notorious immigrant detention center in Eloy, Ariz. The names of many immigrants who have suffered brutal deaths inside the center were read out loud.

The next day, Oct. 8, Veterans for Peace led a march of hundreds to the border, where a rally with speakers and cultural performances took place. Marchers went between Nogales in Mexico and Nogales in Arizona. The two are really one city that has been separated by an ominous iron fence about 650 miles long and almost 30 feet high. Various workshops took place following the march in Nogales.

On Oct. 9, a vigil and rally took place at the border both to remember those who have lost their lives trying to cross over and to celebrate the resistance.

The U.S. Border Patrol admits that 6,000 human remains have been found in the southwest section of the border since 1998. That was just four years after President Bill Clinton signed the North American Free Trade Act, which destroyed local economies in Mexico and fueled deeper superexploitation of Mexican workers, while eliminating millions of jobs in the U.S. and Canada.

An all-day Indigenous People’s Day festival featuring speeches, spoken word and music is planned in Tucson on Oct. 10 to counter the racist myth of Christopher Columbus “discovering” the Americas.