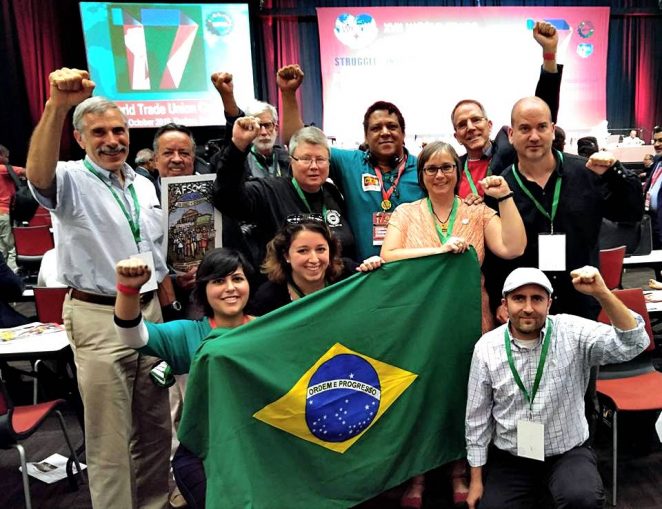 Some of the delegates to the WFTU Congress. Martha Grevatt is in second row, center.

The 17th Congress of the World Federation of Trade Unionists, held in Durban, South Africa, from Oct. 5 to Oct. 8, drew over 1,500 militant unionists from over 100 countries on five continents. “Class-oriented” unionism, anti-capitalism and the need for socialism were stressed by speaker after speaker. Over 100 union leaders from every corner of the globe took the floor.

The theme of its 17th congress, “Struggle, Internationalism, Unity,” showed the WFTU’s differences with another federation, the less struggle-oriented International Trade Union Congress.

Many key struggles were represented, including the 180-million-strong general strike in India this September, the resistance to the coup regime in Brazil and the continuing fight for labor and student rights in South Africa.

Hundred of delegates from the Congress of South African Trade Unions — co-host of the Congress — energized the meeting by spontaneously bursting into song between speeches, sharing the revolutionary spirit of the heroic fight against apartheid.

On Oct. 8, COSATU and WFTU rallied together at Curries Fountain Stadium, the site where COSATU was founded in 1985. A monument to labor was erected, bearing the COSATU emblem and the slogan “An injury to one is an injury to all.” COSATU held a nationwide general strike the day before. “We say to capital, ‘You are the loser,’” a spokesperson for COSATU said.

The WFTU, founded in 1945, is the world’s oldest trade union federation still in existence. It has grown since its last congress in Athens five years ago, with member unions now representing 92 million workers combined, up from 74 million. “Unions are real schools for the working class,” said WFTU Secretary-General George Mavrikos at the final session.