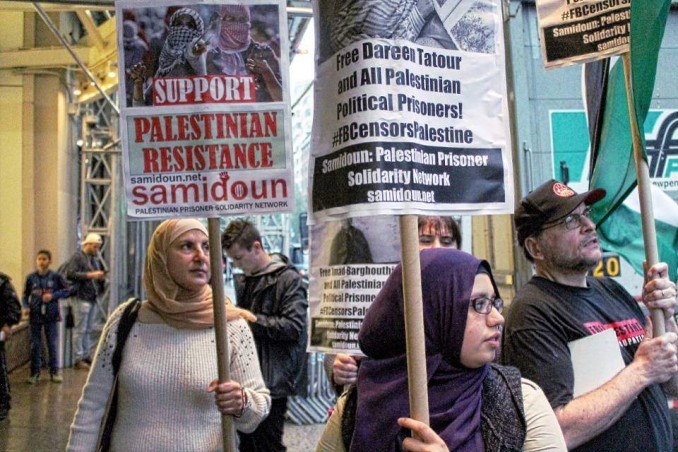 Chants of “Facebook censors Palestine!” drew attention not only from people in the building and on surrounding sidewalks, but also from a global audience. More than 250,000 viewers watched a live video defiantly streamed on a Facebook page whose Palestinian editors the company had targeted a week earlier: tinyurl.com/FB-NY-protest.

The demonstration, organized by Samidoun: Palestinian Prisoner Solidarity Network and supported by the Committee to Stop FBI Repression, the International Action Center, New York City Students for Justice in Palestine, the Pakistan-USA Freedom Forum and the Party for Socialism and Liberation, protested a Sept. 12 agreement between Facebook and Israel to suppress what Israeli officials call Palestinian “incitement” on the social media service.

Following the deal, Facebook suspended the accounts of eight administrators at the pages of two major Palestinian news outlets, Shehab News Agency and Quds News Network on Sept. 23, before deleting the page of a third, Safa Press Agency, on Sept. 28.

“We know of three more mainstream networks that had the same issue,” New York-based Palestinian activist and Quds co-founder Raja Abdulhaq said. “We are a verified media outlet on Facebook, so we would expect the company to give us a little more respect.” (gizmodo.com, Sept. 26)

After widespread criticism, the company restored access to the pages, which have more than 6 million, 5 million and 1 million followers, respectively, calling the suspensions “mistakes.”

But Palestinian activists say Facebook’s deletion of Palestinian content, including the profiles and pages of users with fewer contacts and less recourse, is a recurring challenge.

In a notorious case, the company removed a photograph of the identity card of an elderly Palestinian woman showing her birth year before the state of Israel’s founding in 1948. Multiple users had posted comments indicating that she was older than the occupation.

Even before the Sept. 12 agreement, Facebook had complied with 95 percent of Israel’s requests to delete Palestinian content, boasted Tel Aviv’s “justice minister,” Ayelet Shaked, on Sept. 12.

Shaked is herself infamous for advocating the genocide of Palestinians on Facebook, having posted on July 1, 2014, that Palestinian mothers “should go, as should the physical homes in which they raised the snakes. Otherwise, more little snakes will be raised there.” (electronicintifada.net, July 7, 2014)

Shaked posted her appeal for mass murder on Facebook a day before the kidnapping and burning alive of 16-year-old Palestinian Mohammad Abu Khdair by fanatical Israeli settlers, and six days before Israel’s 51-day bombardment of the Gaza Strip, which killed more than 2,200 Palestinians and drew accusations of genocide. Yet Facebook took no action against Shaked’s account.

The company was instead happy to meet with her as the head of Israel’s delegation on Sept. 12 and promised to follow her dictates for suppressing Palestinian speech.

The New York rally, which also demanded the release of poet Dareen Tatour, astrophysicist Imad Barghouthi and hundreds of other Palestinian political prisoners detained by Israel for their Facebook posts, followed a week of Palestinian protests.

On Sept. 25, Palestinian journalists and activists, along with their supporters worldwide, boycotted the site for two hours while protesting its policies on Twitter.

According to Palestinian media, 53,304 tweets, posted by 8,128 users with the hashtag #FBCensorsPalestine, were delivered to more than 300 million other Twitter accounts.

On Sept. 28, Palestinians in Gaza took the campaign to the streets with a protest outside the office of the U.N. Special Coordinator for the Middle East Peace Process.

“We stand today in condemnation and protest against the ongoing massacre of our rights as Palestinians which Facebook is carrying out,” Safa Press Agency editor Yasser Abu Hin said. (middleeastmonitor.com, Sept. 29)