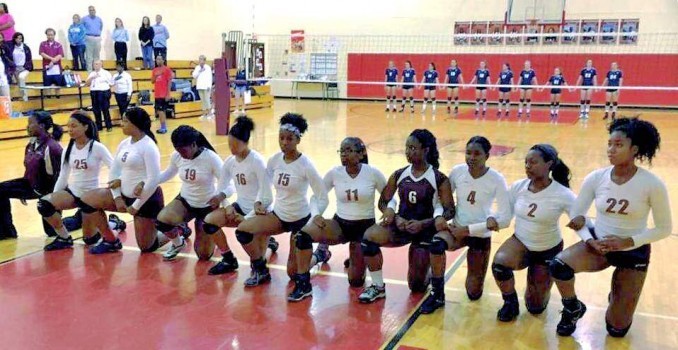 Oct. 3 — Since Aug. 26, when San Francisco 49ers quarterback Colin Kaepernick explained why he began to sit and then kneel during the playing of the national anthem to protest racist police violence, at least 20 more Black people have been murdered by the police. They include California residents Alfred Olango, a Ugandan immigrant in El Cajon; Reginald Thomas Jr. in Pasadena; and Carnell Snell Jr. in Los Angeles.

What is also intensifying is that more and more athletes are taking a visible stand against police brutality, including in the National Football League, the most popular sport in the U.S., which is more than 70 percent Black. Duane Strong, a Houston Texans tackle, wrote an Oct. 2 Sports Illustrated column titled “I stand with Colin Kaepernick: We won’t — we can’t — just ‘Stick To Sports.’”

A native of Richmond, Va., Strong described what happened to him once he moved to Houston: “Like so many other young black men, I was pulled over in a routine traffic stop that ended up as anything but routine. I hadn’t committed any crime, but that didn’t stop the officer from treating me like a criminal. Why was I driving a rented car with an out-of-state license? I wanted so desperately to defuse what he had made into a confrontational situation that I tried pulling up a recent article on my phone to prove I was a member of the Texans. He still didn’t believe me, instead opting to make me sit on a curb for upwards of 45 minutes in intense heat so he could exercise his power over me.”

Strong explained, “The entire experience made me feel incredibly angry and frustrated, but even worse, it made me question the legitimacy of law enforcement; something to this day I remain reticent to do on account of the countless public servants who put their lives on the line every single day to uphold the oaths they have sworn to. Still, if someone like me could be treated like that — simply because of the way I looked — other innocent people surely endure much, much worse.” (tinyurl.com/hh2chsu) 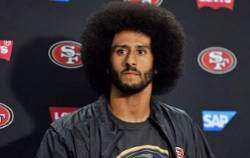 Jared Odrick, a Jacksonville Jaguars player, also wrote a Sept. 12 Sports Illustrated column titled “Football, the Flag and the Right to Speak Our Minds.” In it, he stated: “When we step outside the bounds of third-down efficiency we are told to keep quiet. … Social injustices can’t be ignored.”

Odrick continued, “We’ve forgotten that we’re supposed to loathe falling in line. So-called renegades shouldn’t be embraced only after decades have passed and their causes deemed by historians to be acceptable or inevitable. Muhammad Ali challenged our country in fundamental ways while captivating audiences with his skill in the ring. He is viewed now as a cultural warrior, when in reality he lived as a pariah in his prime.”

“Millions of fans tie their identities to our teams’ successes, but they don’t know the men behind the face masks,” stressed Odrick. “When Kaepernick bucked the system, he forced people to reflect on the constructs they’ve accepted or, worse, had never considered.” (tinyurl.com/jugpaat)

While at least 13 NFL teams have seen individual players either kneel or raise their fists before their games, what has become known as the “Kaepernick effect” has had a profound impact on college and high school players, including whole teams like the Monroe High School Varsity football team in Rochester, N.Y., and the Plainfield South Varsity football team in Illinois.

Players on the University of Massachusetts Dartmouth football team protested against police brutality on Oct. 1. One of them was Raziel Pena-Vargas, a 23-year-old Dominican American, who stated, “I would like for our government or police forces to find a solution to stop shooting unarmed black men. We have to find a solution because this is becoming an epidemic in this country. … When I saw Colin Kaepernick not stand for the National Anthem, I thought, ‘Wow, that takes a lot of guts.’” When Pena-Vargas was a teenager in Fort Lauderdale, Fla., he was beaten by police at a bowling alley. (southcoasttoday.com, Oct. 1)

Fourteen non-football athletes who have recently protested the anthem are players from the Women’s National Basketball Association; the entire Rochester, N.Y., boys soccer team; the entire girls volleyball teams at Tindley Accelerated School in Indianapolis, Ind., and Westside High School in Anderson, S.C. Band members and team spectators have refused to stand for the anthem all over the country.

On Sept. 26 Walmart bakery workers in McDonough, Ga., in the Atlanta-metropolitan area, refused to decorate a cake reading “Blue lives matter” at the request of a cop’s daughter. They said the cake could be perceived as racist.

Kaepernick called the Sept. 26 Trump/Clinton debate “embarrassing” and said that both candidates attempted to show which one was less racist than the other.