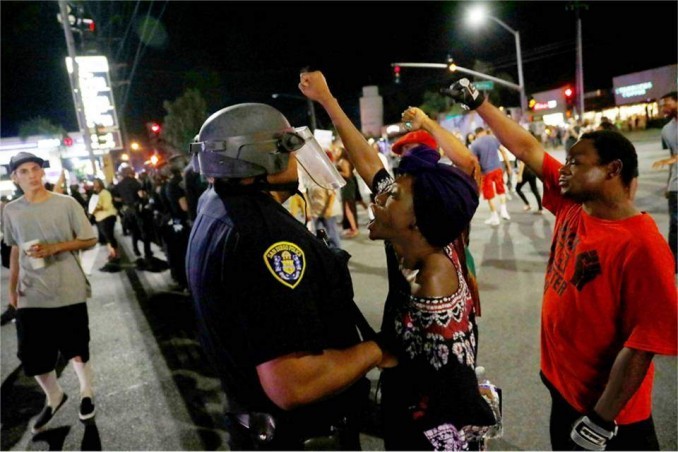 An unarmed Black man named Alfred Olango, a 38-year-old refugee from Uganda, was gunned down and murdered by a police officer on Sept. 27 at 2:30 p.m. in El Cajon, a suburb of San Diego and my home city. Olango was shot five times at a distance of about 5 feet. The El Cajon Police Department officer, Richard Gonsalves, was close enough to him to know that Olango did not have a gun.

A whole series of demonstrations, protests, rallies and prayer circles have been held in response to Olango’s killing. Overnight, demonstrations grew to some 1,000 people in the streets. The police told the area businesses to close down. Angry cries protested all law enforcement, including Border Patrol agents and the district attorney. These events were mostly peaceful with the exception of actions by a small group of racists, who pushed their way into one march wearing Trump hats and carrying the Confederate flag.

On the day of his murder, Olango was having a mental breakdown, according to his mother, Pamela Benge, because of the death of a close friend, when his sister, Lucy Peterson, called 911. She told the operator that he was sick and in need of help. She expected an ambulance.

When El Cajon police arrived, they began to herd him into the parking lot of a shopping center, guns drawn. Olango was still disoriented and witnesses say he was verbally asking the officers to not shoot him, while Peterson shouted that he was unarmed and sick.

Peterson, who witnessed her brother being killed, screamed at Gonsalves, “I called you to help me, but you killed my brother. … Why couldn’t you guys tase him? Why? Why? Why? Why? Why?” (Democracy Now, Sept. 28)

Witnesses at the scene state that the ECPD confiscated the cell phone of a worker at a taco shop who had recorded the murder. However, the ECPD are claiming that the cell phone was freely given to them and not confiscated. An American Civil Liberties Union of San Diego statement notes that “there are disturbing reports from a number of witnesses that police officers confiscated cell phones from people who witnessed the shooting. Confiscating cell phones is a violation of the … U.S. Constitution and analogous rights under the California Constitution.” (aclusandiego.org, Sept. 27)

On Sept. 30, El Cajon Police Chief Jeff Davis held a press conference to release both the surveillance video from the taco shop and the cell phone video from the worker who had recorded the killing from the drive-through window. The press conference was attended by the police chiefs of Chula Vista and San Diego as well as San Diego District Attorney Bonnie Dumanis, who has justified every officer-involved shooting in this city during her tenure.

The Olango family had expressed to the chief of police that they would like to view the video before it was released to the public. However, the mayor and the ECPD then gave them an insufficient amount of time to gather the whole family to come to the police station.

Born in the city of Kampala, the capital of Uganda, Olango came to the U.S. when he was 12 years old with his family, who were fleeing persecution in war-torn Uganda. He survived refugee camps just to be violently gunned down by El Cajon police. He was a father who doted on his daughter, and he leaves behind a large African family.

If Gonsalves had been fired for his sexist actions as he should have been, Alfred Olango might still be alive today. Instead, another unarmed Black man in need of medical attention has, instead, been killed by the police.