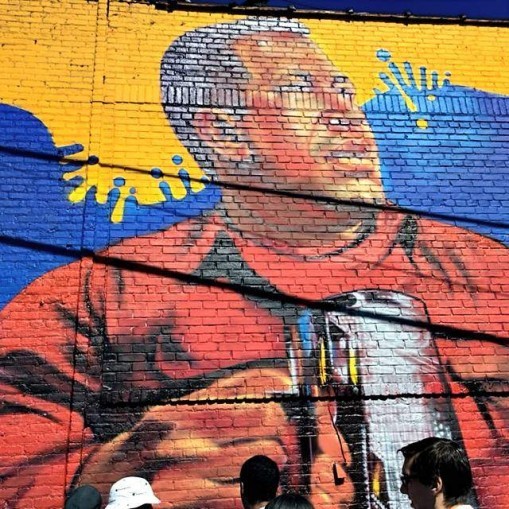 In 2006 Venezuela’s revolutionary President Hugo Chávez visited the South Bronx in New York City. In an act of international solidarity, his government launched a program to provide free heating oil to the people of that oppressed community.

Ten years later, on Sept. 22, over 100 activists gathered at The Point, a community center in the South Bronx, to welcome Venezuelan Foreign Minister Delcy Rodriguez and to dedicate a three-story mural in honor of President Chávez.

The mural, painted on the wall of The Point by Bronx artist Andre Trenier, shows Comandante Chávez, as he is affectionately known, singing along with community activist Omar Freya whose band was performing in honor of Chávez. Speaking at the dedication, Freya recounted how Chávez had spoken with every one of the hundreds of people gathered to welcome him, then picked up an instrument and played with the band. 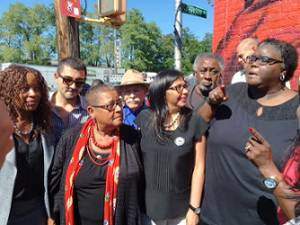 “Comandante Chávez had a special feeling for this neighborhood,” Minister Rodriguez told the gathering. “That is why we are here because we feel that you are like us.” She expressed solidarity with the protests against police brutality in Charlotte, N.C., and the struggle against the Dakota Access Pipeline in Standing Rock, N.D.

Rodriguez also denounced the U.S. government’s plan to give $38 billion worth of arms to Israel to terrorize the Palestinian people, while so many in the U.S. live in poverty. Speaking to the U.N. General Assembly on Sept. 23, Rodriguez delivered a scathing indictment of capitalism as a “threat to the future of humanity.”

Among those welcoming Minister Rodriguez to the Bronx were The Point President Maria Torres; Estela Vazquez, of 1199SEIU United Healthcare Workers East; Shep Sadiki Ojore Olugbala, of the original Black Panther Party and the Universal Zulu Nation; Dr. Raymond Rivera, of the Latino Pastoral Action Center; and Wanda Salaman, of Mothers on the Move.