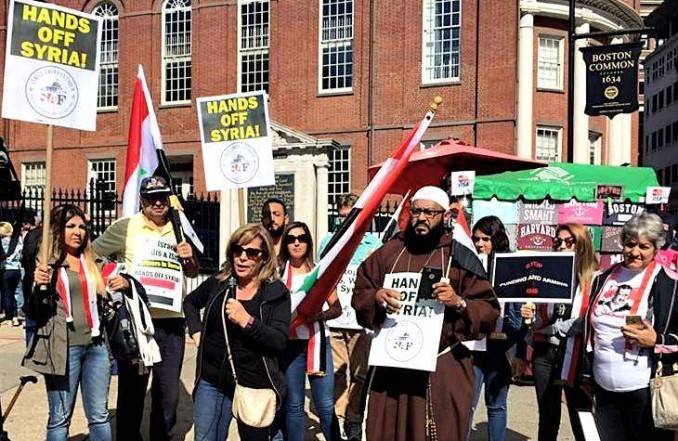 Anti-war activists and the public gathered and rallied at Boston’s Park Street Station for a speakout against the U.S. escalation of the war in Syria. Speakers protested the Sept. 17 U.S. bombing of the Syrian government’s army positions in the eastern city of Deir Ezzur, which killed between 60 and 90 Syrian troops and wounded over 100 more.

The U.S. attack was a dangerous escalation in the five-year war that U.S. imperialism initiated to bring about the overturn of the legally elected and internationally recognized government of Syria.

The protesters decried the U.S. government and its allies for their continued efforts to destabilize Syria and for continuing to arm and support terrorist groups like the Al-Nusra Front and the Islamic State group (IS) in an effort to defeat the Syrian government.

The U.S. Sept. 17 airstrikes facilitated the advancement of IS by targeting Syrian government forces in a strategic location already surrounded by IS.

The rally was co-chaired by Susan McLucas of the Committee for Peace and Human Rights; Frank Neisser of the International Action Center; and anti-imperialist activist Daniel Haiphong. Haiphong exposed the hypocrisy of Samantha Power, U.S. ambassador to the U.N., and Washington’s war on the self-determination of the Syrian people.

Neisser said that the bombings ordered by the Pentagon, in defiance of the diplomatic path begun by the State Department and the president, deliberately sabotaged the Sept. 7 ceasefire agreement negotiated between Secretary of State John Kerry and Russian Foreign Minister Sergei Lavrov.

A large delegation from the Syrian American Forum waved Syrian flags and repeatedly led chants of “Hands off Syria! U.S. out of Syria!” Several members of the delegation spoke, including Eyad Salloum, who thanked everyone for coming out and explaining how defense of the Syrian government and demanding the imperialists leave was the only way to preserve their secular, independent country.

Other speakers included Bishop Filipe Teixeira, founder of the Franciscan Order of Saint Joseph Cupertino, who opened the rally; Charles Clemons of TOUCH 106.1 FM, the voice of the Black community; John McLoud and Joan Livingston, from the Committee for Peace and Human Rights; Al Johnson, from the Smedley Butler Brigade; Jeff Klein reporting on a recent delegation to Syria; Susan Massad, of the Women’s Fightback Network; and Nino Brown, of the Answer Coalition, who condemned the U.S. regime-change destruction of many countries in the Middle East.

Also speaking were Phebe Eckfeldt, of the Moorehead-Lilly election campaign of Workers World Party, and Brian Shea, of the Disabled Caucus of the International Action Center. Shea contrasted the austerity war at home, which is cutting back personal care assistants for people with disabilities, with the billions spent on wars in Syria and around the globe.

Syrian Americans from across the Northeast were joined by anti-war activists at a protest outside the United Nations General Assembly in New York City on Sept. 21. They chanted “Hands off Syria!” and held a moment of silence for Syrian Arab Army troops massacred by Pentagon aircraft on Sept. 17. They also demanded an end to U.S.-NATO support for contra “rebels” and the Islamic State group.

There was loud agreement from the crowd when International Action Center Co-Director Sara Flounders declared, “We need money for jobs, education and hospitals right here, not for war against Syria.”

The action was organized by the Syrian American Will Association, the Syrian American Forum, Arab Americans for Syria and the IAC. It was endorsed by the Peace Council of New York and New Jersey, the People’s Organization for Progress, the United National Antiwar Coalition and Veterans for Peace Chapter 21-N.J.

Greg Butterfield contributed to this article.