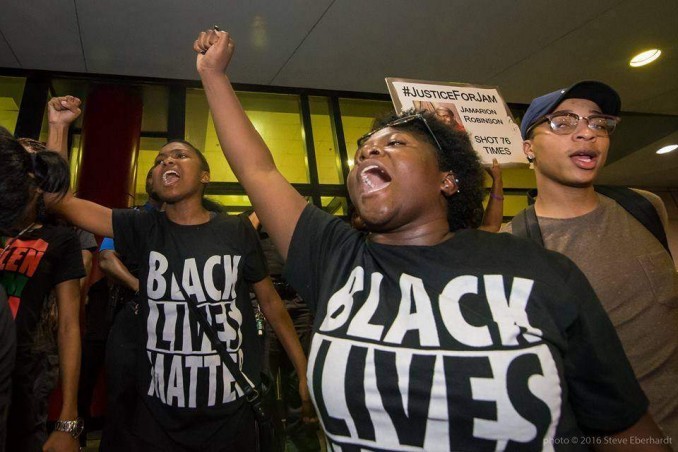 Sept. 22 — A multi-hour demonstration titled “Midnight in America”  gathered on the grounds of the National Civil and Human Rights Museum, then filled the streets of downtown Atlanta on its way to the famed Ebenezer Baptist Church on Auburn Avenue. Located across the street from the tombs of the Rev. Dr. Martin Luther King Jr. and Coretta Scott King, the church where Dr. King pastored is part of the Historic King District.

Protest organizers aimed to show solidarity with the victims of police violence in Tulsa, Okla., and Charlotte, N.C., as well as Atlanta. The marchers continued to take their demands for accountability and justice to the Atlanta police headquarters and then on to the city jail.

They marched with drums and chants of “Black Lives Matter” and “Indict, convict, send those killer cops to jail.” The corporate media covered the largely youthful protest in Atlanta in tandem with the ongoing struggle in Charlotte.

A large coalition of organizations, including the state NAACP, Black Lives Matter Atlanta, Malcolm X Grassroots Movement, #ATLisReady, AUC Shut It Down and others all heavily engaged in the movement against racist and police terror, had quickly mobilized for the action.