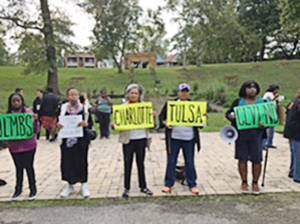 Donnie Pastard, spokeswoman for this ad hoc group of community activists, said at the picket line: “Cleveland stands with all the cities in the USA who have experienced the trauma of recent police violence against Black people in Charlotte, Columbus, Tulsa and Milwaukee. There must be justice reform now! We also salute all the athletes and students around the country who are ‘taking a knee’ against the systemic racism which infects not only policing but the entire criminal justice system.”