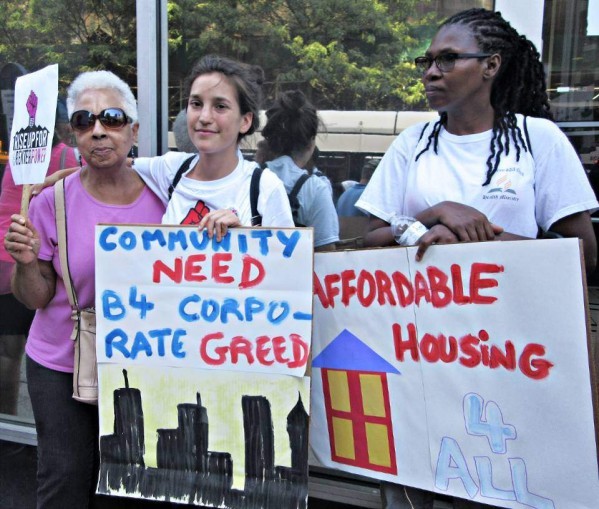 Angry tenants, mostly people of color, came from three of New York City’s five boroughs for a funeral march Sept. 22 in Brooklyn to mourn the death of affordable housing. The event was part of the National Renters’ Day of Action, which took place in nearly 50 cities across the country.

Coming from East New York, Bushwick, the Bronx, East Harlem and other working-class communities, people gathered at Brooklyn’s famous sports and entertainment arena called the Barclay Center. This site was specifically chosen because locating the mega-bucks project there caused the displacement of thousands of low- and middle-income tenants and signaled the beginning of gentrification in Brooklyn.

At the rally speaker after speaker talked about unfair, racist landlords who subject tenants to high rents and displacement. Rosa, a Latina from Casa, declared, “We’re part of humanity!”

A Black man from East New York spoke about people who pay for housing with Section 8 vouchers in unregulated buildings. Landlords are purposefully refusing to do repairs so their apartments will fail inspections and tenants will have to look for other housing. “The truth is that we are poor. And under the city’s rezoning, people are being forced out.”

Brooklyn Anti-Gentrification Network organizer Imani Henry announced a protest against developers in Brooklyn on Sept. 28 and noted that the nationwide housing movement plans to coordinate more actions throughout the fall. These will take place to protest skyrocketing rents and rampant displacement.

After the rally, protesters marched downtown to picket Housing Court where people face evictions. There they chanted, “Come out and face us, don’t displace us!” Chanting “No housing, no peace,” they marched to Wyckoff Gardens, a public housing neighborhood where tenants are fighting privatization. There the working-class fighters sang the famous civil rights song, with some slight wording changes, but with the same strength and militant determination: “We shall NOT be moved!”