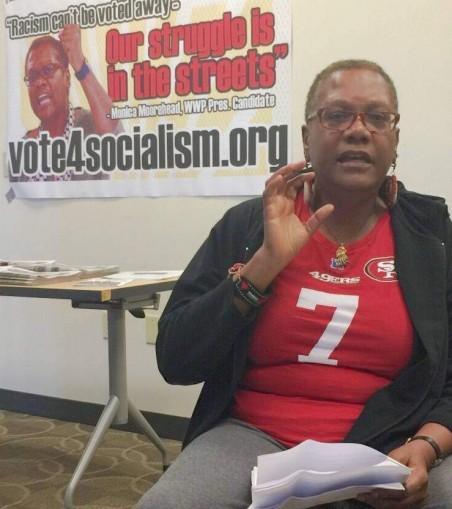 By Gerry Scoppettuolo and Andy Katz

Monica Moorehead, Workers World Party’s presidential candidate, completed her Midwest tour in mid-September, bringing the party’s revolutionary socialist program to Chicago and to Milwaukee and Madison, Wis. Throughout the tour she met with community members, workers and students in a series of open discussions on the elections, socialism and the need for working-class solidarity.

In Chicago, Moorehead was part of a panel on Sept. 15, which included local activist Ruby Pinto and WWP organizer Danielle Boachie. Pinto, a member of the direct action collective Lifted Voices, discussed the need for Black and Brown unity. She gave examples of this from recent struggles in the city, including those which removed State’s Attorney Anita Alvarez from office and won reparations for victims of police torture.

Moorehead acknowledged during a presidential campaign the apparent contradiction of criticizing the elections as being fundamentally flawed: “While we understand that bourgeois elections offer no real fundamental social change for our class to better their lives, with maybe a few exceptions, we as revolutionaries are still obligated to use every arena to engage the masses in activism, to show that only independent mass struggle will get rid of capitalism, root and branch.”

The next stop was Milwaukee, where Moorehead addressed a community meeting at the Wisconsin African-American Women’s Center on Sept. 16. This is not far from the Sherman Park rebellion of Aug. 19, when hundreds of people took to the streets six days after the police killing of Sylville Smith.

Milwaukee is perhaps the most racially segregated city in the United States, where the combination of racist police violence, massive unemployment and capitalist austerity have brought harsh repression — which sparked the recent rebellion.

Beginning her address, Moorehead emphasized the need for solidarity with the struggles and issues of the most oppressed people as central to all liberation movements. She raised the example of the rebellion within the National Football League: “Just look how Colin Kaepernick’s ­refusing to honor the racist national anthem has given voice to the oppressed all over the world.”

Tish Minor, Milwaukee NAACP vice president, told of the high level of lead poisoning in the city’s water. She also explained how prison labor has replaced what used to be unionized state jobs. Center Director Josephine D. Hill likened that situation — the mass incarceration of African-American men — to the Attica rebellion 45 years ago.

Ahmed Mbalia, of the Pan African Peoples Party, brought a message of solidarity to the meeting.

Concluding the tour, Moorehead held an open community discussion in Madison on Sept. 17. In that city in 2011, some 100,000 students, workers and other community members protested, many occupying the State Capitol to fight austerity and union-busting, right-to-work legislation pushed by Gov. Scott Walker.

Moorehead stressed, “Madison was an example of how powerful the working class is when it comes together, and it is that working-class power that we need to tap into to change society.

“Revolutionary socialists have the job of exposing the injustice, the bankruptcy and the impossibility of reforming the capitalist system and of replacing it with socialism.

“Workers World Party understands that the struggle to unite the workers and the oppressed of the world — a part of the struggle that is essential to any genuine socialist movement and to wider socialist unity -– must also be a struggle to forge solidarity, in both words and deeds, with the most oppressed sectors of our global class.”