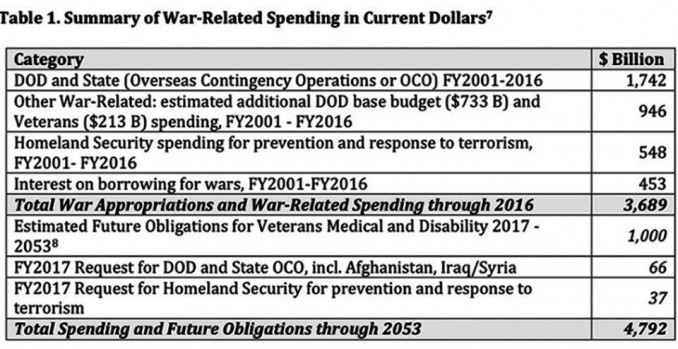 Sept. 18 — Professor Neta Crawford of the Watson Institute at Brown University released a report detailing the costs, both currently and estimated for the future, of the United States’ wars in Iraq, Syria, Afghanistan and Pakistan, totaling $5 trillion (that’s $5,000,000,000,000!).

The wars are a topic rarely discussed by Western media and the cost has almost never been touched on. Indeed the findings of the report lay out a bleak picture of the truly astronomical costs of such a large imperialist military operation.

The costs factored into the study account for everything from initial Department of Defense and State Department appropriations, current and future veterans’ health care costs, Homeland Security costs for countering and preventing terrorism on U.S. soil and, of course, the interest itself on all the money borrowed to pay for everything up to this point.

The figure of $5 trillion is only an estimate of costs by the year 2053. This may seem far away, but the bad news is that a majority of that projection has already been spent or borrowed. The current bill already stands at around $3.7 trillion, or about the equivalent of what has been requested by the federal government for their regular budget for the 2016 fiscal year.

One of the largest costs that is currently already owed is the interest, which has already reached a total of $453 billion (almost a half trillion). This sum is expected to keep climbing since the federal government has made no moves to pay back any of the money borrowed from foreign lenders and selling U.S. Treasury bonds.

The interest payments are the most troubling. The report even warns that interest payments could “add over $7.9 trillion to the national debt.” This can only get worse since President Barack Obama has already requested approximately another $93 billion for fiscal year 2017 for the wars in Afghanistan, Iraq and Syria, as well as to bolster DOD programs.

Obviously this amount of money devoted to any single sector of the U.S. economy deprives other sectors in desperate need. Prior studies have shown the negative effects that war spending has had on job creation, infrastructure development, increased interest rates on federal borrowing and the explosion of the national debt.

The report admits it is also almost impossible to factor in external costs of the wars for allied countries and the countries that have been devastated by over a decade of military operations. It will be a long time before we know what the real costs of repairing the devastation in nations like Iraq and Syria will cost the world and how those countries will actually pay that price.

The costs are going to continue to rise worldwide as the so-called war on terror goes into its fifteenth year. The Pentagon is guilty of causing material and financial devastation both domestically and worldwide.

This report lays out just one aspect of the damage done since September 2001, and the world will continue to see the loss of life and physical consequences as time goes on. Except for a handful of corporations and individuals that have grown rich from war spending, humanity as a whole has only suffered from U.S. imperialist aggression.