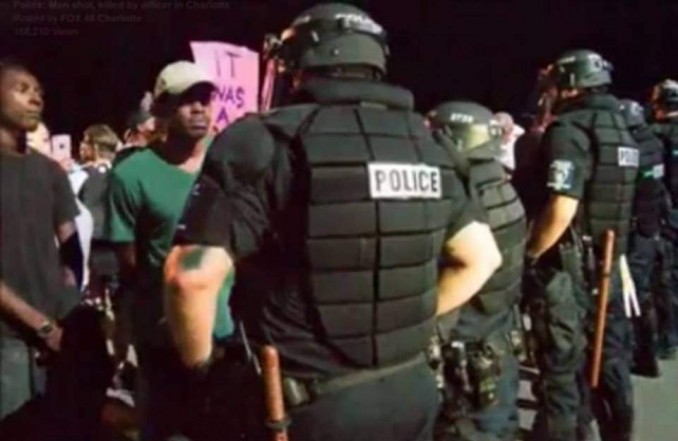 The following article is based on an eyewitness report.  As we go to press on Sept. 21, another rebellion has erupted in Charlotte, N.C.  A protester was shot in the head in downtown Charlotte.  Tear gas is being used on the protesters along with other forms of repression.  The Charlotte police chief claims in an earlier press conference today that Keith Lamont Scott was armed, while eyewitnesses to the shooting say that Scott was reading a book when he was killed.

On Sept. 20, an estimated 1,000 protesters shut down northeast Charlotte, N.C., after cops fatally shot Keith Lamont Scott, a 43-year-old Black man with disabilities, who was waiting for his children to get off the school bus..

Protesters started gathering around 6 p.m. outside The Village at College Downs apartments. A couple hours later as the police started to leave the neighborhood where Keith was killed, protesters heroically surrounded their cars and would not allow them to move.

It didn’t take long for the Charlotte-Mecklenburg Police Department to send out cops in full riot gear. Protesters didn’t let up, meeting the cops at every line they made. As soon as it turned dark, CMPD started throwing teargas at protesters, which was thrown back at them in noble resistance. This heroic stand off by the protesters continued for hours.

The frontline moved down Old Concord Road, with protesters moving to shut down WT Harris Blvd. Eventually they shut down main highway I-85 from 12 midnight to 4 a.m. During this time the protest continued to escalate, as the righteous people brought much-deserved justice to multiple cop cars and to trucks liberated so their content  could be set ablaze.

Scott’s family says he read books while waiting for his children every day. Throughout the night protesters stated over and over that reading while Black is not a crime! CMPD claims he was “armed,” which in an open carry state is not a crime. But we know that the police are pigs who lie to cover up their murders on behalf of capitalists.

In 2015, CMPD only killed Black people; in 2016, two of three people killed by CMPD have been Black. Activist organizers and the people mobilizing in Charlotte are fed up with the militarized pigs occupying Black neighborhoods. Cop cars and the private property the police serve to “protect” can be replaced, but Keith will never see his seven children again.

September 20 saw multiple heroic acts of  Black self-determination, which shook the pigs and capitalist class to their rotten core. The courageous protesters resisted the pigs at every step of the march, and the struggle for justice is far from over.

All forms of rebellion by oppressed people must be supported, especially when our class can truly strike a deep blow right in the heart of capitalism and white supremacy.