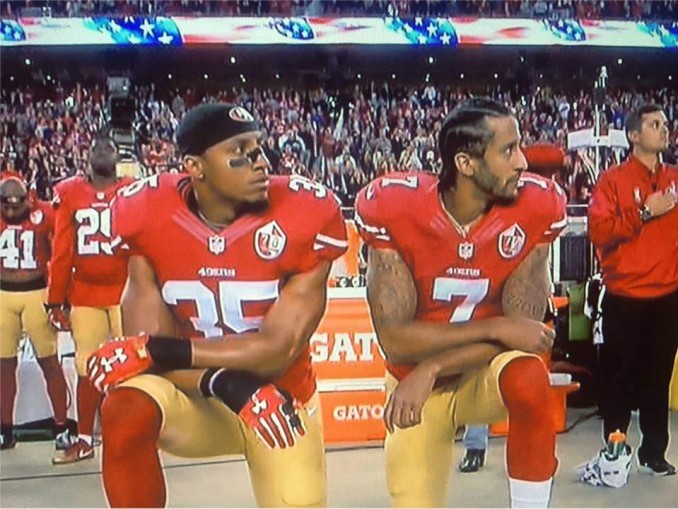 Sept. 13 — The political rebellion that Colin Kaepernick, an African-American National Football League quarterback with the San Francisco 49ers, began with a simple sit-down during the playing of the U.S. national anthem on Aug. 25 during a preseason game, is spreading like a slow-burning wildfire with no end in sight. Since that day, his No. 7 jersey has been one of the top sellers.

His individual act of rebellion — some now call it a one-person insurrection — responded to the escalating epidemic of police violence and other injustices against Black people and other people of color. On his Twitter page, Kaepernick has expressed his outrage, like millions of others, about the police murders of Black men and women like Alton Sterling, Philando Castile and Sandra Bland, with no kind of real justice in sight.

Kaepernick characterized Sterling’s murder as one lynching taking place all over the country. His words and actions are a reflection of the Black Lives Matter uprising.

On Sept. 2, teammate Eric Reid kneeled next to Kaepernick for the 49ers last pre-season game in San Diego. Brandon Marshall from the Denver Broncos, took a knee before his game on Sept. 8 and lost two of his endorsements as retaliation.

September 11 was the official Sunday opening for the 2016-2017 NFL season. That day also marked the 15th anniversary of the bombing of the two World Trade Center towers, which ushered in an unprecedented U.S. government war against civil liberties, especially targeting Muslims, South Asians and Arabs. This bombing offered an excuse for the U.S. government and its military to escalate the war in Afghanistan and the eventual mass destruction of Iraq’s sovereignty. Every NFL stadium had military troops covering football fields, warplanes flew over the stadiums and even bald eagles were unleashed during 9/11 ceremonies.

This kind of war-frenzy and jingoistic display is meant to intimidate any protest against the U.S. flag and the anthem, no matter the motivation. Players who follow in Kaepernick’s footsteps risk being labeled as anti-military and unpatriotic, which diverts attention from the main issue of expressing outrage about racist repression and wanting to find solutions.

But not all NFL players let the 9/11 frenzy stop them from showing solidarity with Kaepernick in protesting during the playing of the anthem. Martellus Bennett and Devin McCourty from the New England Patriots and Marcus Peters from the Kansas City football team raised their fists. Jurrell Casey, Wesley Woodyard and Jason McCourty from the Tennessee Titans performed the same gesture. This harkens back to the heroic protest by Tommie Smith and John Carlos at the 1968 Olympics during their awards ceremony.

Peters said, “I’m Black. I love being Black and I’m supporting Colin as far as what he’s doing as far as raising awareness of the injustice system.” (New York Daily News, Sept. 12)

High school and college football players are proudly showing themselves to be young Kaepernicks. They are as young as 11 and 12 years old. In Beaumont, Texas, the entire Beaumont Bulls football team and their coaches took a knee in solidarity with Kaepernick on Sept. 10.

These youth, a majority Black, started receiving death threats and racist epithets. That these reactionary responses can damage the psyche of Black young people for many years reinforces Kaepernick’s views on systemic racism.

In response to hearing racist language from his teammates right before a Sept. 2 game, 16-year-old Rodney Axson and two of his teammates decided to spontaneously take a knee in Brunswick, Ohio. White teammates called Axson “n—-er” to his face and he has been threatened with lynching.

Mike Oppong, a player for the Doherty Memorial High School, was suspended for taking a knee before his game in Worcester, Mass., on Sept. 9. After Oppong received massive support, the suspension was rescinded.

In Camden, N.J., at the initiative of their coach, the entire Woodrow Wilson High School football team and other coaches took a knee during the anthem. Preston Brown, the Black head coach stated, “All my life I felt like I stood for the national anthem as a formality. It never meant much to me. … Because of recent events that happened the last couple of years, things I experienced in college being an African-American student athlete in the South (at Tulane), I felt it was an appropriate time to do that.” (highschoolsports.nj.com, Sept. 10)

One football player from Indiana State University and one from the University of Tulsa knelt during the national anthem at games their teams were playing on Sept. 10.

On Sept. 7, three West Virginia University Institute of Technology volleyball players fell to their knees during the playing of the national anthem before a game. The players, all Black women, said they were kneeling in solidarity with Kaepernick.

A Black woman in the U.S. Navy posted a Facebook video of herself kneeling during the playing of the anthem at the Naval Air Station in Pensacola, Fla., and now faces “administrative” actions.

Keeping her name anonymous, she said her actions were in solidarity with Kaepernick’s and that she was protesting among other things the third stanza of the Star-Spangled Banner. This stanza glorifies the massacre of the Colonial Marines, Black troops who fought on the British side during the War of 1812 in order to win and keep their freedom. Francis Scott Key, who wrote the lyrics to the anthem, was a slaveowner.

She went on to say on her page, “I don’t disrespect the men and women who serve — who I serve among. It’s just, until this country shows that they’ve got my back as a Black woman, that they’ve got my people’s back — not even just my people but all people of color — I just can’t. And I won’t.” (navytimes.com, Sept. 8)

Colin Kaepernick and Eric Reid, once again, knelt down together during the anthem before the 49ers played the St. Louis Rams on Sept. 12.

Moorehead is the Workers World Party candidate for president of the United States.