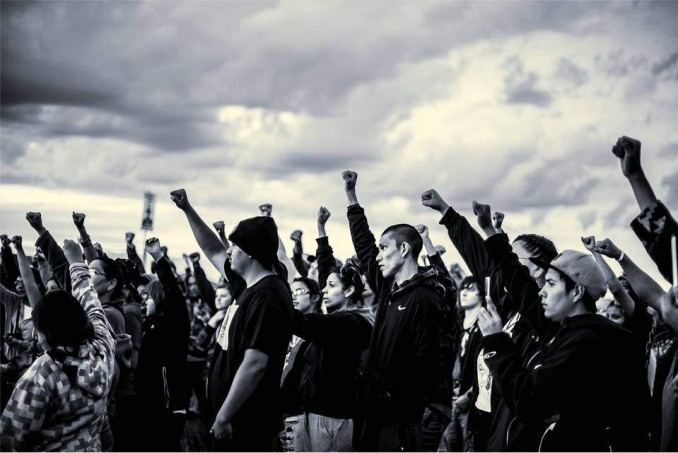 Thousands of Indigenous people from more than 200 Native Nations, as well as non-Native supporters, have swelled the numbers of those blocking construction of the Dakota Access Pipeline (DAPL) at Standing Rock in North Dakota. These protectors of the water seek to thwart the plans of a Texas-based corporation, Energy Transfers, that is attempting to build a pipeline that threatens the clean drinking water of millions and desecrates sacred burial sites of the Oceti Sakowin (the “Great Sioux Nation”).

There are 7,000 to 10,000 people at Standing Rock as we go to press in mid-September – ranging from Native people from throughout the Americas, a Maori delegation from Aotearoa/New Zealand and Kanaka Maoli from Hawaii, Palestinian solidarity groups, Black Lives Matter activists and white environmentalists.

#NoDAPL water protectors are encamped immediately outside the Standing Rock Reservation, on treaty land, and are organized into multiple camps, including the Sacred Stone Camp and the Red Warrior Camp.

The #NoDAPL struggle has become an unprecedented, historic uprising in defense of Indigenous sovereignty and the right to clean water. As people in the camps often say, “Water Is Life. Mni Wiconi.”

Background to the struggle

Originally, DAPL was supposed to go through Bismarck, N.D., but was rerouted to Standing Rock over concerns by Bismarck’s mostly white population of risk to the city’s water supply. Energy Transfers then made plans to build DAPL under the Missouri, Mississippi and Big Sioux rivers in violation of the Standing Rock Sioux Tribe’s federally protected rights.

The Standing Rock Sioux Tribe (SRST) objected, and some protectors began to camp in a planned construction area in April. But on July 26, the Obama administration via the Army Corps of Engineers gave a quiet go-ahead to the route, giving SRST only a 48-hour notice that digging was to begin.

Multiple arrests occurred in August as the protectors valiantly blocked a road to keep pipeline workers from offloading heavy equipment and locked down onto construction equipment.

On Sept. 3, the company unexpectedly began excavation at a sacred burial site. Led by people from the Oceti Sakowin (Seven Council Fires of the Great Sioux Nation) and other Indigenous nations, protectors intervened to stop the desecration. The company sent in private security guards who set attack dogs on the people. The security guards were from G4S, a company notorious for brutal prison abuse in the U.S. and Palestine.

The scene recalled the horrific police-dog attacks on Black civil rights protesters in the U.S. South. Many Indigenous people also remarked on the fact that Christopher Columbus and his men had used specially bred dogs to attack and eat Arawak, Taino and other Indigenous People more than 500 years ago.

Big business interests pushed back on Sept. 8 when the governor of North Dakota, a major pipeline booster, called out the state’s National Guard to “protect” the oil corporations and banks against the thousands of Indigenous people and their supporters protecting their own land and water. These courageous defenders and water protectors were smeared repeatedly by North Dakota authorities and described as “agitators” by the commanding general of the NDNG.

On Sept. 9, a federal district judge refused to block the DAPL permit, ruling against the Standing Rock Sioux Tribe. But within minutes, a joint statement was issued by the Departments of the Interior, of Justice, and the U.S. Army Corps of Engineers, temporarily halting construction bordering Lake Oahe on the Missouri River while more environmental studies are conducted. The government also promised to meet with national tribal leaders and reconsider issues of tribal consent to these sorts of projects.

Native-led resistance to DAPL has continued, unbroken by attack dogs, hired goons, state troopers, National Guard and other forces of repression. International outrage at the dog attacks led to a breakthrough in corporate media coverage, which had largely been ignoring what was happening.

On Sept. 13, police in riot gear arrested 22 protectors and medics, as well as some independent journalists, as the protectors were trying to block construction by nonviolent direct action in one of the many areas where pipeline work is taking place.

While these arrests are taking place, none of the security guards has been charged with the assaults against protectors at the construction site.

The federal government could simply pull all the permits and cancel this project, but it has not chosen that course. It did not mandate an end to work at the multiple sites that the protectors are defending. For now, the federal government has only delayed some work, while the company is building in many areas, including in other states such as Iowa, where arrests are also taking place.

On the other hand, this reprieve was a victory, because the Obama administration was forced to intervene entirely due to the immense strength and resolve of Indigenous people in the #NoDAPL movement and the outpouring of support from so many non-Native people.

Perhaps the U.S. government thought that, by issuing a temporary halt, people would believe everything was fine and just go home. To the contrary, thousands more people have poured into the camps, because it is clear that continued vigilance is required.

Dallas Goldtooth from the Indigenous Environmental Network and a veteran organizer of the Keystone XL fight, commented to Yes magazine about the historic support from Indigenous Nations at Standing Rock: “I don’t think there has ever been as large a mobilization and a unified, unilateral Indian Country support like this. We’ve had chairmen, traditional chiefs, chairwomen, the leaders of the leaders of Indian Country, who have come to this camp.

“Also, we’ve had a lot of non-Native allies that are 100 percent supportive of the fight and struggle here because they see the connections…. [B]ecause the messaging is that water is life, so many people can connect with that. Whether you’re Native or non-Native, whether you’re from Chicago or Detroit or New Orleans or up in the Bakken, we all understand the importance of protecting the water. That brings us together.”

The struggle is not over. Our support continues to be crucial. We need to continue to support the Water Protectors and the encampments. We must demand all charges be dropped against those who were arrested. We must insist on the removal of the National Guard and other police and private security guard harassment. We must defend the sovereignty of Native Nations. We must support ongoing struggles against pipelines and fracking.

Ways you can help

CALL Gov. Jack Dalrymple of North Dakota and tell him you are outraged at the actions of the state against peaceful Indigenous peoples. Phone: (701) 328-2200.

CALL the White House, tell President Obama to honor his commitment to the people of Standing Rock and STOP the Dakota Access Pipeline now: (202) 456-1111.

SIGN THE PETITION to the White House to stop DAPL: tinyurl.com/StopDAPL

CALL or EMAIL executives of Energy Transfer Partners, which is building the pipeline:

FIND A SUPPORT ACTION near you and more information online. Check out nodaplsolidarity.org